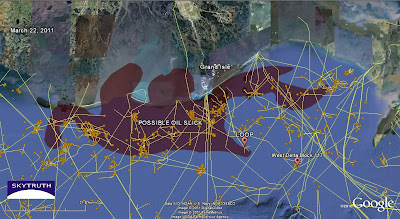 During the Gulf Oil Spill last year one media source was on target and on the numbers, and that was the blog site Sky Truth.

While NOAA was still towing the BP corporate line of 5000 barrels a day, it was Sky Truth and their dedicated team who first estimated the flow rate was many time higher than that.

This week Sky Truth took a look at a mysterious oil spill near Grand Isle L.A, one that regional oil experts from Anglo-Suisse said was a minor event with just 4 gallons spilled.

After analysing NASA/MODIS satellite imagry Sky Truth estimates this spill to be an astonishing 640,728 gallons.

If we were betting folks in a contest between the government, who should be minding oil in the Gulf, and Sky Truth we would go with Sky Truth, the question now is, who's going to clean all this oil up?
Posted by Horizon Charters Guadalupe Cage Diving at 4:12 PM No comments: 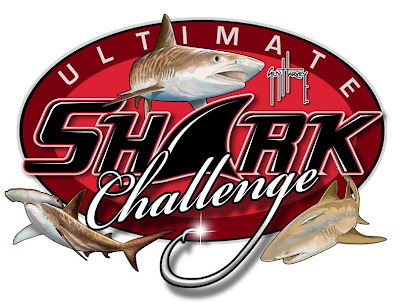 After its history-making debut in 2010, the Guy Harvey Ultimate Shark Challenge Tournament and Festival is back and bigger than ever. By combining the high-stakes allure of competitive, big-game sport fishing with cutting-edge science, practical conservation principles and informative entertainment, this trend-setting event is pioneering its way as an industry leader and model for the Next Generation of Shark-Release Tournaments.

According to USC Creators and Directors, Sean Paxton, Brooks Paxton II and Capt. Robert Moore, “We were blown away watching how our teams stepped up to the challenge last year, and how well they did so many things that had never been done before in a professional tournament setting. The bottom line is great anglers make great tournaments and we can’t wait to see it unfold this time around. The level of participation and competition is heating up, big time.”

Teams in 2011 will have the option of entering a two-day eliminative competition with either 2 or 3 anglers and will be competing for $15,000 in cash and prizes. A dozen shark species are eligible for points, but finding and catching them aren’t the only challenges teams will face. To qualify, eligible sharks must meet a minimum total length of five feet. The animals will be measured in the water using a device, custom-designed and provided by the USC, before they are conventionally research tagged by the team and released back to the wild. In some cases, candidate specimens may be handed off to a research team to be outfitted with a satellite tracking tag.

Robert Hueter, Ph.D., director of Mote Marine Laboratory's Center for Shark Research and his staff are the USC’s chief science and research partner, and will oversee those aspects of the tournament, including all tagging operations. Plans call to outfit a number of sharks with satellite-linked transmitters that will track their movements after release. Hammerhead and bull sharks will be the focus of the satellite tagging efforts, but other species, such as tigers may be tagged as well. These tags are designed to transmit location and other valuable information about the shark's travels. Once the satellite tags are deployed, the public will be able to follow these sharks' travels on the internet.

An Observer, professionally trained and certified by USC Staff and the Mote Center for Shark Research, will accompany all teams throughout the competition. Accepted Observer applicants must successfully complete a mandatory course in: shark species identification, proper tag and release procedures and tournament rules.

Other USC protocols mandate the use of heavy conventional tackle to reduce the time between hook-up and release of all animals and inline, non-stainless steel circle hooks to avoid the internal hooking of sharks.”

While competition heats up on the Gulf of Mexico, there will be plenty of action and lots to do on shore at the tournament and festival host location in Punta Gorda. Laishley Crab House at Laishley Park has teamed up with the USC to provide an exciting and entertaining festival for the entire family that will take place at the venue’s picturesque waterfront location all day Saturday and Sunday.

Event organizers are especially pleased to announce that world-renowned marine artist, angler and tournament partner, Guy Harvey, will be making a personal appearance during the weekend to meet with fans and to promote the tournament’s shared mission.

Harvey, a longtime marine conservationist and founder of the Guy Harvey Ocean Foundation, said the tournament will increase global awareness of the important role that sharks play in the world's oceans and our ecosystem.

"The Guy Harvey Ultimate Shark Challenge Tournament and Festival will be a uniquely exciting event for participants, spectators and everyone who cares about the future of our oceans," he said.

The Ultimate Shark Challenge festival will also feature competition highlights broadcast to digital displays on site, allowing fans to cheer on their favorite teams all the way to the end. Event sponsors will be on hand to conduct product demonstrations and sales, along with a wide variety of merchant vendors, unique attractions like Mote’s Mobile Aquarium, entertaining and educational shark-centric exhibits, interactive demonstrations, and of course, lots of delicious food and cold beverages.

- Festival Admission: Free to the Public

History of the Guy Harvey Ultimate Shark Challenge
After years of interaction experience with sharks as recreational catch & release innovators, volunteer researchers and advocates for practical conservation principles, USC tournament architects, Sean and Brooks Paxton, began leveraging their entertainment background in efforts to deliver their shark-release concept to a wider and more mainstream audience. The brothers recognized effective and credible collaborations would be essential so they set out to assemble a core team that would share their ambitions to effectively combine the goals of sport, science and conservation.

In 2009, they approached Robert Hueter, Ph.D., director of Mote Marine Laboratory's Center for Shark Research. The brothers already knew Hueter, and that he had run a successful research-driven, catch & release shark tournament from 1989 to 1998. After further refinements to the brother’s concept, the trio contacted renowned marine wildlife artist, scientist and conservationist Guy Harvey, Ph.D., who enthusiastically supported this innovative tournament model. In early 2010, the Paxtons met Capt. Robert Moore, an accomplished southwest Florida charter captain, guide and catch & release shark specialist. After productive discussions and shared philosophies, Capt. Moore rounded out the team as an instrumental collaborator and partner in delivering this Next Generation Shark-Release Tournament model.

About Mote Marine Laboratory
Founded in 1955, Mote Marine Laboratory is an independent nonprofit marine research organization. Mote is dedicated to advancing the science of the sea through the study of marine and estuarine ecosystems, through our public Mote Aquarium and through an education division that provides unique programs for all ages. Throughout 2010, Mote celebrated its 55th Anniversary with special events highlighting its groundbreaking ocean research and outreach.

Posted by Horizon Charters Guadalupe Cage Diving at 9:59 AM No comments:

It's Monday ya'll and Blogfish has the video find of the week.

Behold Nuclear Boy, Japans simple explanation for kids on an unfolding disaster, even we get it now: