Why "some people" should never dive with sharks

Not photo shopped, not funny either.

Why filmmakers feel the need to use very dead Tiger sharks in films and or television shoots is beyond us.

This kind of reminds us of a similar rant we soapboxed a few weeks ago concerning another Tiger from another shoot at another time. Of course that film was shot by Italians in 1979 so you have to forgive them...they knew not what they were doing.

As for this guy, clearly he knows not what he is doing either. If you're going to ride a dead Tiger (click image for full horror) ensure the crew has kept it in the ocean so it does not dry up as badly as this one did. Makes for a more credible scene.

Peter Thomas L.A Times is putting us out of a job. His Outposts Blog is home to some of the sharkiest news you can get fresh from the media machine:

This is a chart (click image) showing the female shark's wayward wanderings after its release in the Santa Barbara Channel on Sept. 7.

Its tag was set to report to scientists at Stanford University's Hopkins Marine Station in five months, but it popped free prematurely on Oct. 8 at 6 a.m..

It was recovered near the backside of San Miguel Island on Oct. 23.

If the shark is alive, it may be traveling south to warmer water. The last white shark the aquarium held swam around the Baja California peninsula into the Sea of Cortez, where it remained until its tag life expired.

Posted by Horizon Charters Guadalupe Cage Diving at 10:29 AM No comments: 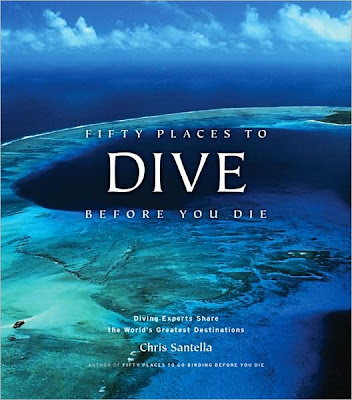 Far for us to be the ones to brag about anything but...if you happen to be at any major book store over the next few months you may want to pick up the following book.

Naturally if there's only "50 Places to Dive Before You Die" Guadalupe has to be featured in there somewhere.

Chris Santella writer, and fly fisher, searched the planet and interviewed some of the industries noted dive adventurers seeking the back stories of the best dive sites around. He got ours on a river in Oregon last summer casting Chernobyl sized hopper imitations to waiting 20 inch browns who sipped these ungainly bugs off the surface like floating over sized Pez.

We're not going to tell you what we told him (buy the book) suffice to say after 7 years of operations at Isla Guadalupe we had some stories.

Posted by Horizon Charters Guadalupe Cage Diving at 10:11 AM 1 comment: