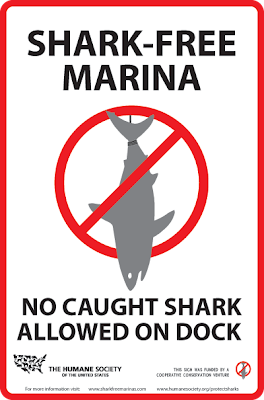 
(March 15, 2010) — The Humane Society of the United States has teamed up with Shark-Free Marinas in a campaign to significantly reduce worldwide shark mortality.

Fittingly, the effort is called the “Shark-Free Marina Initiative” and seeks the support of marina operators worldwide to prohibit the landing of any shark on their premises, thus encouraging catch-and-release fishing. To help publicize the plight of sharks and the need for their protection, The HSUS and SFMI are supplying signs and public information to participating marinas in the U.S. and the Caribbean.

“The Humane Society of the United States is pleased to join the efforts of the Shark-Free Marina Initiative,” said John Grandy, Ph.D., senior vice president of wildlife for The HSUS. “The HSUS works tirelessly to end animal cruelty, exploitation and neglect and is deeply concerned by the deteriorating status of shark populations.”

Luke Tipple, executive director of the Initiative, said, “The Shark-Free Marina Initiative welcomes the support of The Humane Society of the United States and its members to protect beleaguered shark species.”

The HSUS, the nation’s largest animal protection organization, strives to end the killing of sharks in sport tournaments around the United States, and works to raise public awareness about celebrating ocean life instead of destroying it. The Shark-Free Marina Initiative encourages marinas to adopt shark-friendly policies, preventing kill tournaments from using those facilities.
Facts Dozens of marinas in the United States, the Caribbean and the South Pacific have registered as Shark-Free Marinas since the initiative began in 2008. The HSUS also works to protect sharks by campaigning against shark finning, and the organization recently petitioned the National Marine Fisheries Service to list the porbeagle shark as endangered.

The Shark-Free Marina Initiative runs a Regional Ambassador program where anyone can get involved in their important work. Visit the SFMI Web site (sharkfreemarinas.com) or The HSUS Web site (humanesociety.org/protectsharks) for more information.

Other groups supporting the Shark-Free Marina Initiative include the Fisheries Conservation Foundation and Cape Eleuthera Institute.