Titanic White Shark Caught in the Sea of Cortez 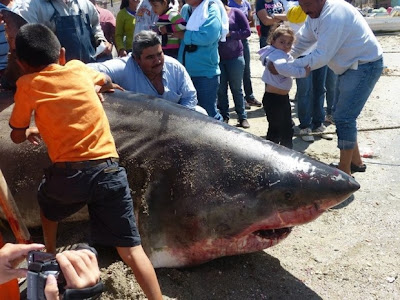 Peter Thomas Outdoors is reporting one of the largest white sharks ever caught in Mexican waters this week, an animal estimated to be close to 20 feet long.

If true, this animal might represent what many have long suspected in the Sea of Cortez, a smaller distinct white shark population in these waters that may well be on it's way to complete extinction.

Or...this is just another dead shark in a population of known sharks that are pupping in this region (ya happy now DS?).

Time will tell or maybe it won't, as the numbers of big whites caught in nets seems to be on the increase.


"We were amazed and immediately realized that we had a huge, dead, great white shark, and then we thought what are we going to do?," Guadalupe said in an interview with Tracy Ehrenberg of Pisces Sportfishing, which is located in the resort city of Cabo San Lucas.

The shark was nearly as long as their 22-foot panga, or skiff. They had to tow the behemoth to the beach, where about 50 people helped drag it onto dry sand.

"Guadalupe and Baltazar swore they had never seen a fish this big before in their lives," the Pisces blog stated. "Even though on March 13 of this year, some of their fellow fishermen had also caught a great white, which had weighed 990 pounds."

The irony that one of the fishermen that caught this shark was named Guadalupe has not escaped us.
Posted by Horizon Charters Guadalupe Cage Diving at 7:39 PM No comments:

All hail our new Robot Overlords, courtesy of DARPA. We're glad to see our expansive 2011 tax returns are being used to develop bots with the capability to run up stairs.

Just the human version of a bunch of monkeys hammering away at the detonator of a cosmic nuke?

Ahh science, you gotta love it, and to think just 100 years ago yesterday the Titanic sunk: