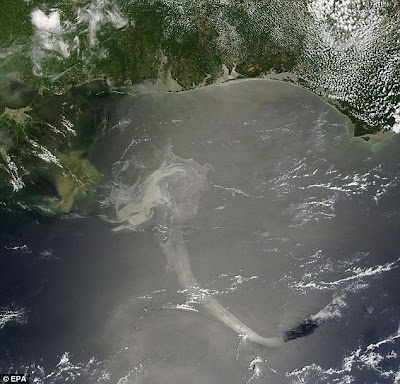 Michael Hanlon, a writer for the Daily Mail in the U.K says the Gulf disaster will, eventually, become a footnote to history, with the oil vanishing and life returning to normal.

He likens those who have expressed deep concern for the month long oil spill as "doom-mongers."

At least that's the gist of what he is saying, using time stamp events from other oil disasters around the world including Cornwalls own disaster in 1967 to make his point.

The oceans of the 1950's-70's were different oceans. The preponderance of data from today's oceans show an unhealthy trend. Many commercial fish stocks, like the Atlantic Bluefin Tuna are at their lowest recorded levels and a rise in ocean acidification is putting extreme pressure on marine life worldwide.

The Atlantic Bluefin spawns in the Gulf at this time of year and these delicate fry, an entire generation of larval tuna which inhabit the same trophic layers as the Gulf oil spill and close to a million gallons of dispersant, are under threat.

The science of this disaster will be a template for other oil spills in the future. While the future of many species of marine life from Mexico to Cuba remains uncertain.
Posted by Horizon Charters Guadalupe Cage Diving at 8:58 AM No comments:

Posted by Horizon Charters Guadalupe Cage Diving at 8:24 AM 2 comments:

Save Our Seas Shark Conservation 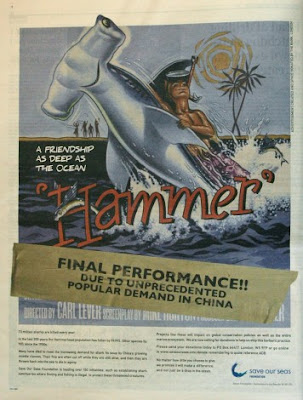 Save Our Seas Foundation has been at the forefront of smart shark conservation messaging.

From their Rethink The Shark campaign (see toaster) to this weeks full page ad in the Times, their brand is one of audience curiosity matched with sharp messaging.

If you buy a copy of The Times in the UK today you’ll see an interesting ad highlighting the plight of our sharks and in particular the hammerhead shark whose population has declined by 99.99% in the last 200 years. The dramatic decline in shark populations worldwide is linked to the rising demand for shark fin soup in countries like China where it is considered a delicacy.

The Save Our Seas Foundation is working hard to stop the decline of our shark populations which are essential for healthy oceans. This is no easy task and requires a multi-faceted approach. From sponsoring pioneering research into DNA analysis of shark fins, to innovative media and awareness campaigns like our Rethink the Shark campaign, we hope to make a real difference in saving the sharks in our oceans. The advert in the Times depicts a 1970’s style cinema poster advertising the final performance of ‘Hammer’ due to unprecedented demand in China and is the latest in our ongoing struggle to get the dire message out to the general public – our sharks are in serious trouble.