There are a lot of misconceptions when people talk about sharks. One of them is the myth that they don't get tumors or cancer. We previously talked about sharks with cancer, here and here, but while those 2 blogs were about a Great White Shark, we also have a Bull Shark in Fiji with a tumor growing out of her mouth. Her name is "Ms Jaws".

DaShark from Beqa Adventure Divers thinks it all started when he first saw her swimming around with a fishing popper stuck to her jaw.

Her jaw got progressively worse. This photo shows the progression of her lesion from 2011-2013.

When I met "Ms Jaws" for the first time in 2014, her jaw already looked like this. 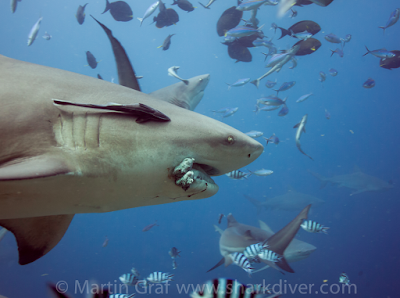 The next time I saw her was in 2016 and she looked a lot worse. Her jaw was hanging down and it looked like it would be impossible for her to feed successfully. 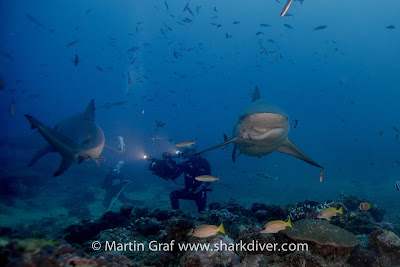 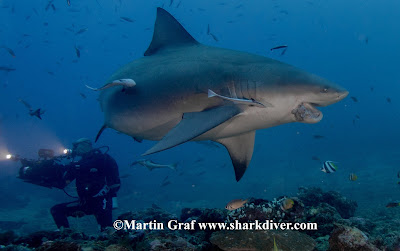 Aside from her badly broken jaw and tumor, she did seem to be OK though. She didn't look skinny or showed any obvious signs of malnutrition. I have to admit that I was worried about her and didn't have high hopes of her surviving much longer.

Now we have some good news! DaShark just reported that "Contrary to my dire prediction, Mrs. Jaws is alive and kicking - and judging from her girth and body shape, she is very capable of feeding herself which is real good news indeed!"

He also posted a video of her swimming around on facebook here and you can read his blog here.

If you are interested in more information on this particular shark's tumor, read this paper by Juerg Brunschwiler from the ETH University in Zuerich.

I really hope that she will continue to do well. She is a remarkable animal.

Of course, if you really want to know how she is doing, join us in May on our expedition to Fiji, where you can look for her on our Bull Shark dives. We have a couple of openings left. Call us at 619.887.4275 or email crew@sharkdiver.com for more information.

About Shark Diver. As a global leader in commercial shark diving and conservation initiatives Shark Diver has spent the past decade engaged for sharks around the world. Our blog highlights all aspects of both of these dynamic and shifting worlds. You can reach us directly at staff@sharkdiver.com.
Posted by Shark Diver at 4:16 PM No comments: