From the guys over at the Squid Force Blog. They find the most amazing videos. This one's got pretty much everything:

"Take more than a stinkin' shark to make you back off now". Who wrote this stuff? 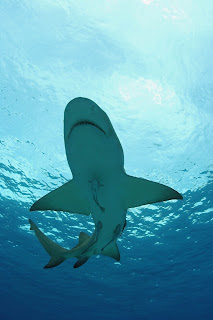 David McGuire, conservation filmmaker, a field associate of the California Academy of Sciences and a shark advocate recently took part in a round table discussion with Global Commons radio about sharks and shark conservation.

His film "Sharks Stewards of the Reef" remains one of the best looks at the fate of modern sharks with a strong conservation message. To quote David "It's a bad time to be a shark". 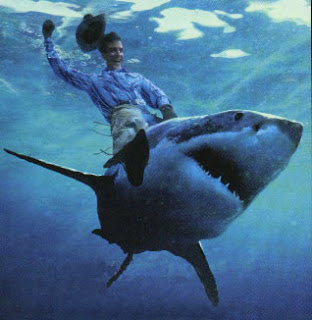 We spend a lot of time on this blog talking about the 200 million dollar shark diving industry and how the actions of local operations ripple across the globe to eventually effect us all.

For the second day in a row a major newspaper in the U.K has acquired a You Tube video shot by a diver at Isla Guadalupe in 2007.

The video details one of the worst cage breaches ever caught in the history of cage diving.

The operation in question has had several cage breaches going back to 2004 at the same dive site with the same sharks.

By way of disclosure we also operate at the same site and before anyone proffers the idea this post about "slamming a competitor" we would like to put that to rest-now.

This post is about media, responsibility, and leadership within an industry. It is about our responsibility to the animals we make a living from, it is about treating the resource as a renewable one and not as a Biological ATM Machine.

This video, for the anti shark diving lobby, who would like to see an end to shark diving in places like South Africa, Australia, the Bahamas, remains the perfect visual media tool. It is the Golden Key.

For example this video is one of the primary reason the Mexican Navy enacted a ban on chumming at Isla Guadalupe in 2008. This ban affected an entire fleet of operators and shark divers from all over the planet. All due to a video and the complete lack of any media control exercised by a commercial shark diving company.

The abject irresponsibility of allowing this video to remain on the Internet where it continues to portray great whites in a 70's mindset, continues to harm other operations at this dive site, and continues to provide a platform for those who want to end shark diving-cannot be understated.

Leadership within an industry begins with the sharks and it ends with the realization that everything we do on a local level will eventually affect those on the other side of the planet either positively or negatively. The next steps are up the the company responsible for this event.

It is high time they took full responsibility for this sad affair and "retired" this video for the sake of the industry and for the ongoing perception of sharks worldwide. These animals deserve better, you know it, the industry knows it, and no amount of post event website spin will change that.
Posted by Horizon Charters Guadalupe Cage Diving at 9:12 AM 11 comments:

According to a recent article the days of "Sharks with Frick'n Laser Beams" is closer than you think.

Apparently DARPA, our military's mad science wing has been exploring implants in the brains of sharks that "steer them" from a remote location like, sorry for the pun, Predator Drones.

Darpa military research is currently exploring ways to use electronic stimulus to control shark behavior and movement. In fact, scientists at Boston University have already developed brain implants that can influence the movements of dogfish (members of the shark family) by "steering" them using a phantom odor.

The military objective of controlling the movement of sharks is outlined in the New Scientist Magazine as follows; "By remotely guiding sharks' movements, the military hopes to transform the animals into stealth spies, perhaps capable of following vessels without being spotted. The Pentagon hopes to exploit the ability of sharks to glide quietly through the water, sense delicate electrical gradients and follow chemical trails.”
Posted by Horizon Charters Guadalupe Cage Diving at 8:35 AM No comments: