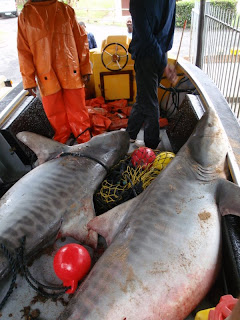 From the folks over at Beqa Adventure Divers blog this morning this is a serious issue. As with all shark conservation issues this one has many actors. The fact remains that shark protection nets and drum lines are an antiquated 60's solution to a modern ocean and to shark conservation.

To Ella and Mathilda
victims of man's madness

This is in reference to a recent spate of Tiger Shark fatalities in Aliwal Shoal.

Very tragic and very stupid, too, as South Africa benefits from a thriving Shark Diving Industry and has much to loose indeed in terms of reputation as an Ecotourism destination but also, in terms of tourism revenues and related employment opportunities.

The incidents have caused much uproar among Shark aficionados - but I fear, not much beyond that. I hope I'm wrong. In that respect, the comment by one "Anonymous" on a South African blog may have been prophetic. The author is clearly an insider and probably someone with a pedigree of getting things done (I got my suspicions...). He evidently also knows of the harmonious, dispassionate, un-opinionated, pragmatic and never controversial world of Shark Conservation, as witnessed by his choice to remain unrecognized - and by the ensuing comments!

This is what he wrote.

If you cannot figure it out let me suggest the following things that can be done by YOU today to get some traction on this as neither you nor Julie-let's saver some sharks-really have a clue. If you cannot get some action from your own home waters then stop posting this crap. DO something better than this. These are YOUR damn animals and YOU have to make changes not the rest of the planet. Good luck."

Question is: what has happened since?

Is everybody over there (as in local dive operators, NGOs, etc.) working together and has dialogue been sought with the Authorities? As in, finding solutions?
Posted by Horizon Charters Guadalupe Cage Diving at 9:08 AM 3 comments: 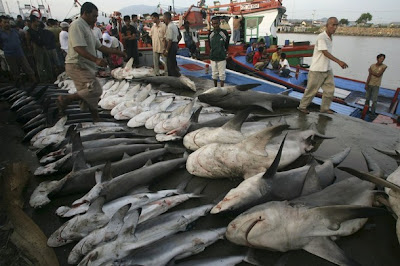 TOLIARA, December 2008 (IRIN) - Coastal communities in southwestern Madagascar, who risk their lives travelling long distances in dugout canoes to supply a lucrative demand for shark fins, face an uncertain future as unsustainable fishing practices threaten the survival of the marine resources on which they depend.

People in villages along the southwestern coast are reporting a dramatic decrease in all marine resources. "Around 2000 the decline really started here. The octopus catch fell and sea cucumbers disappeared. Some fish species also disappeared," Roger Samba, in the village of Andavadoaka, in Toliara Province, told IRIN.

"It is difficult to catch enough fish to sell. People go far away, fishing from early in the morning until late at night, to catch not even 10kg or 20kg of fish - just 5kg."

When shark fisherman Zoffe loads his nets into his pirogue (a dugout canoe, often with a sail) in the morning and sets out from his home in the coastal town of Morombe into the deep waters of the Mozambique Channel, he knows that he will be lucky if he catches anything.
Posted by Horizon Charters Guadalupe Cage Diving at 8:30 AM No comments: