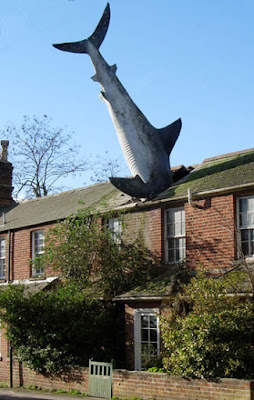 SILICON VALLEY, California (CNM) -- A massive frozen shark dropped out of a clear blue sky Tuesday and demolished a house on Granson Street south of the Yahoo! campus today.

The shark fell from a private jet chartered by CEO Jerry Yang of Yahoo!, according to a statement issued Tuesday by the Silicon Valley County Sheriff's Office and the Department of Homeland Security.

"The airplane, a 747 converted transport craft, was en route from China and the campus of Alibaba.com a web portal that sells sharks fin and many illegal sharks products," a joint statement said.

Police said the area has been sealed off pending an investigation.

Representatives from Yahoo! Inc quickly pointed out that the shark was a "cultural practices issue" for Mr Yang and company and he did not want to discuss with authorities how the 17 foot frozen shark had come to be on board the private jet chartered by Yahoo! or if the shark was indeed a threatened/protected species or not.

Emergency personnel were on the scene quickly, no one was hurt in the bizarre accident, authorities said.

The following Underwater Onion was brought to you by Shark Diver. Seriously-Yahoo! Inc continues to invest in and support Alibaba.com a 2 billion dollar web portal that has become the New York Stock Exchange of dried sharks fins and shark products. 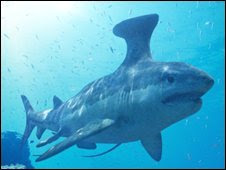 Taking a moment here to look back a few hundred million years ago into the world of sharks.

It's ironic that we humans, who have only been around a few hundred thousand years, have evolved the ability to to recreate the ancient world of sharks to a high degree of probability. With the advent of television we can now show future generations of humans what ancient sharks once looked like (see video).

Meanwhile we're rapidly destroying the ancient sharks evolutionary prodigy, our modern sharks, in a manner that might well see a total worldwide reduction of 60% by 2020.

Take a moment and think about that one.
Posted by Horizon Charters Guadalupe Cage Diving at 8:38 AM 1 comment: