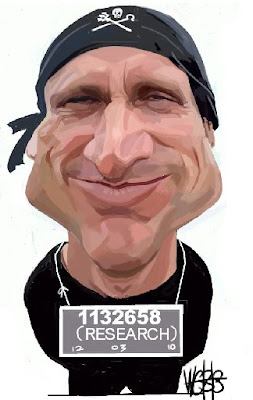 The revelation this week that Sea Shepherd actually lies, fabricates and manipulates media, and has a zero effective rate at saving wildlife should come as no surprise to the readers of this blog.

For the past two years, and much to the SSCS faithfuls consternation, we have been deconstructing the Sea Shepherd Media Myth in a series of ongoing posts. Detailing the millions of donor dollars lost or squandered by SSCS, the actual SSCS media distortions and fabrications, and calling into question SSCS claims of saved wildlife.

To be fair, we were once full fledged supporters of SSCS and Paul Watson's seemingly take no prisoners brand of Direct Action. All that ended with the "shot that never was," wherein Paul Watson fabricated, out of whole cloth, the myth that Japanese whalers shot him dramatically in the chest during season one of Whale Wars.

Call it what you will, this myth, lie, fabrication, staged media moment, was lapped up by a series of green blogs and Facebook groups as consummate fact, transforming a horrific lie into a myopic truth, which then perpetrated a nasty racist backlash directed at Japan and Japanese people from around the world.

Our support ended there as credibility with NGOs is something we hold sacrosanct.

To be effective you have to be a credible source.

SSCS has sold (cheaply) every shred of dignity, credibility, and the public's trust to grease the wheels of a bloated media machine that has very little to do with wildlife conservation and everything to do with glitzy Hollywood parties, $60 vegan appetisers, and a somewhat dubious reality television show now into its third season.

There's no doubt that whaling needs to end.

Into that conversation stepped Sea Shepherd who have hijacked the global conservation movement and created a new toxic paradigm for what conservation is, bending the ideal of actual constructive work and metrics for success into a series of inane staged stunts. In the process they have created many "SSCS Lite" conservationists who believe that anything goes in the world of conservation. In this dark place metrics for actual success are a distant goal.

While Rome burns, Paul Watson and his entire media troupe fiddle around with faked press releases, staged media moments, and outright media lies. As if any of this will stop a harpoon with an explosive tip ripping though a whale, or the sharp tip of a Hakapik into a seal, or the rusty blade of knife through a sharks fin.

Demand more from your conservation org. After 25+ years Paul Watson has no conservation victories to his or his organizations credit, every single wildlife issue he has tackled is still ongoing, and your donations perpetrate more of the same in a rudderless and increasingly hysterical conservation organization that should depart the world scene - soon.

In 1978 a younger, slimmer, more idealistic Paul Watson blew the whistle on Greenpeace, much like Peter Bethune did this week with Sea Shepherd. In this video Watson details the stark reality behind Direct Action conservation campaigns with open ended commitments.

In this video Watson is also revealing Sea Shepherds unpleasant reality as it stands today when "the organization becomes more important then the issue."

Posted by Horizon Charters Guadalupe Cage Diving at 9:16 AM No comments: