Back in Florida demand for safe shark encounters did not go away. Enter land based shark tourism, the future of shark encounters worldwide, as more aquariums and theme parks open their enclosures to the public:

Posted by Horizon Charters Guadalupe Cage Diving at 8:45 AM No comments:

Sharks and Idiots - A Dark Nexus

You have to read the news of a recent bull shark attack in the Bahamas this week twice. At first this is your standard story of a speereo who had unwittingly brought on a 7 foot bull shark with a freshly speared grouper (ambrosia for sharks). This is a typical shark/human story that usually resolves its self without anyone getting hurt.

Then Mr. Luis Hernandez went on to recount what happened to him, telling a local reporter the circumstances that lead up to his unfortunate mauling:

Luis Hernandez, who was in the mood for fish, had just speared a grouper at a local reef when he spotted the shark.

"The first thing I thought was, 'Wow, nice shark!" he said. "So I swam a little closer and thought about spearing it, but decided to let it go. I just poked it so it would get out of my way."

But the shark wouldn't leave. It eventually lunged at him, sinking its teeth into his arm.

Clearly his shark tale puts this encounter back on Mr.Hernandez who, after spearing a grouper, decided to engage a 7 foot bull shark. In the realm of good ideas, with wetting your finger and applying it to a light socket being say, a "one" - Mr. Hernandez executed a perfect "negative 20" with his shark stunt and paid the ultimate price.

Sharks are not playthings. They are predators. Your first reaction to a wild, baited bull shark, should never be "Wow, nice shark!". Sadly this is not the first time someone has made a miscalculation with a baited bull as this video from You Tube reminds us:

Posted by Horizon Charters Guadalupe Cage Diving at 7:20 AM 3 comments: 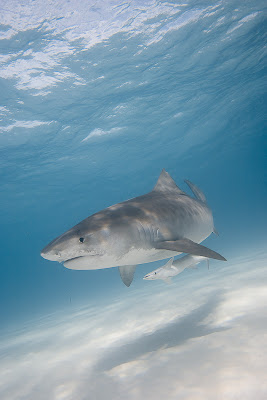 Tammy Jo Anderson is the education coordinator for UnderWater World Guam and an advocate for sharks. This week she offered a well thought out Op Ed on the reasons for keeping wild shark populations. Here is an excerpt:

Sharks are a different story.

These fish have been swimming our oceans for millions of years before even dinosaurs were walking around on the planet. Sharks have survived massive changes in climate and numerous other hazards to make it to today.

Now, the main thing that is threatening their existence is us.

Complete Story
Posted by Horizon Charters Guadalupe Cage Diving at 7:02 AM No comments: