Miriam likes Steampunk - So do we

If you're looking for cool oceans content that runs the gamut from recent Antarctic studies to media look no further than Deep Sea News.

It's one of the many reasons we feature these guys on our blog roll, the other reason is that we're just not all that good at finding stunning videos like this one.

If you have 15 minutes today, sit back and say ahhh. Here's to "Lost Things," may we all never lose sight of them: 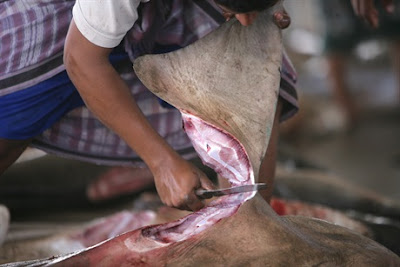 The shark tourism numbers are eloquent, in places like the Maldives sharks are worth $6.00 to local fishermen, where a live shark at a tourism site might be worth $30,000 over the lifetime of the site, and that's just one shark.

In the Bahamas a $78 million dollar shark tourism industry safely introduces thousands of divers to the world of sharks each and every year.

So, reading the recent discussions on the senate floor about a proposed shark fin ban in Guam yesterday is a bit dis concerning as it would appear that at least two Senators are seeking a complete ban on shark chumming as well.

During floor discussions, Sen. Respicio proposed an amendment that would also prohibit the practice of shark feeding, which has been used to lure the animals.

Cruz said he supported the amendment.

"The intent of this bill was to allow nature to be nature," said Cruz.

He said that bringing sharks closer to shore was "unnatural" and dangerous.

Sen. Chris Duenas also rose in support of the amendment.

"It is the experience of many fishermen as they go fishing is that there are a lot of sharks," said Duenas. "But there's no question that when you add fish parts to the water … you would artificial attract sharks to a location, fishermen have a hard enough time off there fending off sharks."

Sen. Judith Guthertz called the practice of attracting the animals through fish parts "very dangerous." She said the bill wanted to prevent dangerous commercial activities that would attract the animals to cages.

"It's inappropriate and unfair to the animals," she said.

"You can train a dog to wear a skirt and sit up and bark. Or pants for that matter," said Pangelinan.

He said that the practice has meant that sharks have been conditioned to follow the sounds of boats -- because the animals know that the sound may mean food. 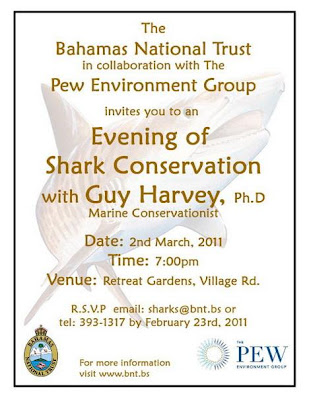 NASSAU, Bahamas -- The Bahamas National Trust are very excited to have as a guest speaker, Guy Harvey. Dr. Harvey has agreed to provide support for the BNT’s Shark Conservation Campaign that is being implemented in The Bahamas in partnership with the Pew Environment Group. In addition to his speaking engagement, Mr. Harvey has designed a poster promoting protection of shark and a special Guy Harvey T-shirt for the conservation campaign.

Guy Harvey is a unique blend of artist, scientist, diver, angler, conservationist and explorer, fiercely devoted to his family and his love of the sea. Growing up in Jamaica, Guy spent many hours fishing and diving with his father along the Island's south coast. He was obsessed with the creatures of the sea and began drawing pictures of the many different fish he observed. Guy captures marine wildlife animals in their natural environment with extraordinary detail and brilliant colors.

Harvey has traveled the globe to observe marine live and is passionate about its conversation. The BNT are thrilled that he has agreed to speak and support the Shark Conservation Campaign and hope that many of you will join in for what promises to be an exciting evening.

For the past two years, the Guy Harvey Ocean Foundation and the Guy Harvey Research Institute at Nova Southeastern University have been sponsoring and conducting an ongoing project to tag and track tiger sharks in the western Atlantic. The goal of this long-term study is to gain a better understanding of the migration of the tiger sharks in this region and to use that data to aid conservation efforts. Dr. Harvey will be speaking on the tagging and tracking process that has now been expanded to the Bahamas in an area known as Tiger Beach In Grand Bahama.

Space is limited to 300 persons for this event, therefore all members please RSVP by February 28th if they want to have a seat. Call 393-1317 or email sharks@bnt.bs
Posted by Horizon Charters Guadalupe Cage Diving at 7:59 AM No comments: