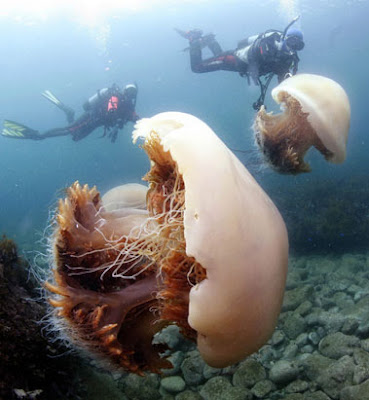 More from the files of the absurd this week. The last place you want to be fishing these days is the Philippines :

A fisherman yesterday died of “cardiogenec shock” after he was attacked by a jelly fish in Brgy. Tiling, Cauayan, Negros Occidental, a report from the Provincial Heath Office said.

The victim was identified as Emilio Lindayao, 40, and a resident of the barangay. Lindayao, and his brother went for a swim in the coastal area of Brgy. Tiling in Cauayan, when he was attacked by the jellyfish.

The Romans had a saying for what Sea Shepherd have become the absolute masters of: "Bread and Circuses".

This term aptly applies to the ongoing misdirection and political theatre Sea Shepherd has foisted on to unsuspecting and well meaning donors worldwide.

We were once supporters of Sea Shepherds seemingly tough brand of eco-enforcement. Their self styled "take no prisoners" brand looked for a time like the real deal.

Finally something would be done, changes would be made, and the world's animals saved. If Greenpeace was getting too soft these guys would changes things.

Sadly, this was not to be the case. Sea Shepherd quickly devolved from mighty warrior to theatre of the absurd and continues along these lines to this day.

The main culprit behind Sea Shepherds lack of credibility turns out to be the bloated and ego centric Captain Paul Watson and whoever stage manages his media for him.

Claiming to be shot in the chest during this years whale hunt in the Southern Ocean, and producing a fake video to back this absolute and image costly fabrication up was the last straw for us.

In the end it all comes down to money. With dollars for what Sea Shepherd is attempting to do drying up worldwide they have chosen to "ratchet up the noise" or "wag the dog" in hopes of attracting more money for further ineffectual and costly efforts to stop the continuing pillage of our oceans.

If one takes a good look at Sea Shepherd and can navigate beyond the outright fabrication of story lines, if one can leap over the growing "chasm like" credibility gap they have adopted like self inflicted wound, one would discover an ineffectual eco group that has failed repeatedly to stop any of the ongoing slaughter. They trot out numbers and make bold claims that they have slowed things down, but the slaughter continues.

Take your pick, whales, seals, sharks, fish, all continue to be slaughtered to this day, none of it has been stopped. If Sea Shepherd was a for profit company, and this was their metric for success, no one would would invest in them. Add to that anyone's ability to actually believe what they say and what you have is...nothing. A black hole for financial backers who demand success, not "Bread and Circuses".
Posted by Horizon Charters Guadalupe Cage Diving at 7:29 AM 8 comments: