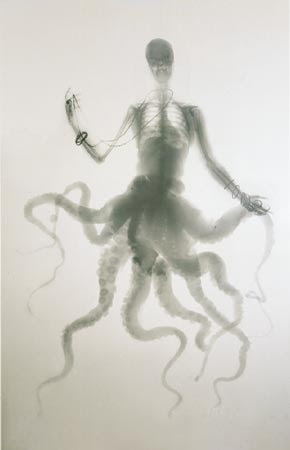 TOKYO, Japan (CNM) -- Researchers aboard Japanese whaling vessels have "completely halted" their much-criticized hunt for Sperm Whales in the seas near Antarctica, after finding "something unusual" in a freshly harvested whales stomach.

"On Monday we received frantic reports of a human like form inside a whale", said the chief Japanese government spokesman Hachimura Mobutatka.

Sperm Whales are known to feed on Giant Squid in Antarctic waters and remains of these massive cephalopods as long as 120 feet have been recovered.

Meanwhile, the International Whaling Commission, having received the same "stunning reports", have halted all whaling activities in Antarctica by it's members.

The IWC chairman has asked Japan not to hunt Sperm whales in the foreseeable future until lab tests are completed on the "human like form" found inside the dead whale.

"We're happy about the whaling fleet pull out, amazed by the news...and just a little bummed", said David Greenwright spokesman for the Environmental Whaling Coalition. The groups members had planned to put themselves between harpoon and whales, using water jets to block harpoon shots. "Now we're back in New Zealand with nothing to do".

This latest underwater Onion was brought to you by Shark Diver If it's safe to go in the water, we'll tell you!
Posted by Horizon Charters Guadalupe Cage Diving at 1:37 PM 4 comments: