RTSea on ICCAT, Oceana and Sharks 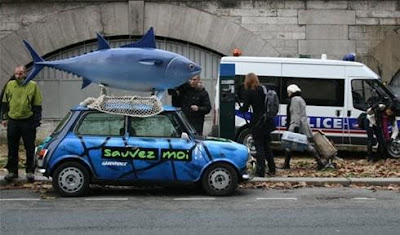 Richard Theiss at the RTSea Blog has in depth look at the current round of talks over tuna catches and "tuna like fisheries" in Paris this week - ICCAT.

As always Richard distills this complex issue down to the major players and what's truly at stake for the oceans.

As reported earlier today, the ICCAT (International Convention for Conservation of Atlantic Tuna) is meeting this week in Paris as a part of the organization's annual review of bluefin tuna catch limits. But ICCAT's charter is not limited to the management of only tuna fisheries. It also considers the management of "tuna-like" fisheries, which is a catch-all phrase that can include other pelagic migratory predators including swordfish, sailfish, and sharks.

While outcomes from past ICCAT meetings have served more to support the commercial fishing industry than the support of ocean species conservation, recognized conservation groups, like Oceana, continue to bring information to the attention of the ICCAT regarding the rapidly declining numbers of apex ocean predators. This year, Oceana is focusing on sharks and the need for the ICCAT to seriously consider addressing the number of sharks being taken - whether legally or otherwise - and the potential for further abuse through under-reporting.

Oceana has released a new report that estimates that as many as 1.3 million sharks were taken in the Atlantic in 2008. Averaging the weight of the various 21 species listed in the report as being caught within ICCAT-monitored waters, that number equates to 65,000 tons of shark. To put that into perspective, the ICCAT currently limits tuna harvests to under 14,000 tons of tuna - and that is a figure that many scientists believe will doom the Atlantic bluefin tuna to extinction. Just what can we expect with 65,000 tons of shark disappearing each year?

On top of that, Oceana believes 1.3 million sharks could be a gross underestimation due to under-reporting. According to Oceana, based on scientific estimates from Hong Kong shark fin trade data, the true number could be three times higher - although, you can expect that figure to be dismissed by fishing industry advocates as speculative and unreliable.

“Sharks are virtually unmanaged at the international level,” said Oceana's Elizabeth Griffin. "ICCAT has a responsibility to protect sharks. It is time to protect our ocean's top predators."

Posted by Horizon Charters Guadalupe Cage Diving at 7:59 AM No comments: