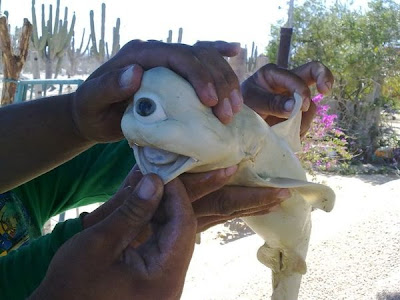 File this under "Montauk Monster," and we predict that this single image will soon become the summer shark freak-out image of 2011.

Hat Hip to Peter Thomas Outdoors for the find - actually we kinda wished he didn't find it.

What you are looking at is a "one-eyed bull shark fetus," pulled from a pregnant animal somewhere off La Paz Mexico.

The eye is the freaky part and we might have called "Faux Shark" on this one until word that renown shark scientist Dr.Felipe Galvan had seen, studied, and produced an initial paper on this otherworldly animal.

Dr.Galvan in tandem with Dr.Mauricio Hoyos are the lead shark researchers at Isla Guadalupe studying white sharks with CICIMAR.
Posted by Horizon Charters Guadalupe Cage Diving at 11:05 AM No comments:

The spinner shark (Carcharhinus brevipinna) is a species of requiem shark, family Carcharhinidae, named for the spinning leaps it makes as a part of its feeding strategy. This species occurs in tropical and warm temperate waters worldwide, except for in the eastern Pacific Ocean. It is found from coastal to offshore habitats to a depth of 100 m (330 ft), though it prefers shallow water. The spinner shark resembles a larger version of the blacktip shark (C. limbatus), with a slender body, long snout, and black-marked fins. This species can be distinguished from the blacktip shark by the first dorsal fin, which has a different shape and is placed further back, and by the black tip on the anal fin (in adults only). It attains a maximum length of 3 m (10 ft).

Posted by Horizon Charters Guadalupe Cage Diving at 8:44 AM No comments: