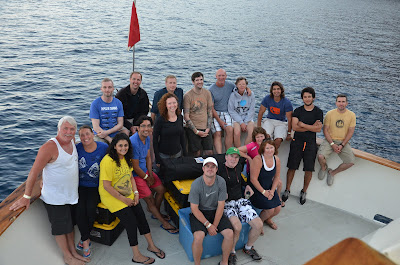 Some people love sharks and some people are willing to travel quite a ways to see them. Newly minted Shark Diver Joanne Faulkner is one of those people, and yes, Joanne, we'll have you join us anytime!

All my life I have wanted to dive with great whites. My Dad took me to see Jaws when I was about 10 years old – maybe he thought it would be fun to scare the kids?

Well, I loved it, couldn’t get enough of sharks after that.

OK, early on the first morning (after a rocking and rolling 20 hours on the open ocean to get there), my new dive partner and I were standing on the back deck, no one else around (they were all either still in bed, or having breakfast inside, or getting ready to dive).  I was trying on my wetsuit for the first time, which was dry – and I was dry – so this was not an easy task. As I was bent over wrestling with the leg of the suit, a great white shark breached clear out of the water, and splashed back into the water. I was about 2 feet from the railing, and I saw it's belly!!!!!

We had no time to be scared, it was about a second or two at most. With the colour drained from his face, my dive partner looked at me, walked into the center of the deck, and said quietly, "holy #$%&#! we're all gonna die." The poor guy had come to Guadalupe Island to get over his fear of great white sharks… so, not a good way to start! He was convinced we were about to be eaten. But then he started to joke about it, saying that pretty much nothing else could top this experience of seeing a great white jump out of the water right in front of us. And it’s true. I will always remember that split second, putting me into the realm of a very minimal group of people in the world who have ever witnessed a great white shark breach.

We saw 9 great whites over the 3 dive days, 2 of which were ‘new’ to divemaster Martin – they had not previously been identified. Being September, the female sharks are not (usually) in Guadalupe, but we did see one – the rest were males. They are nothing like in the movies and on tv – these sharks were calm, docile, just slowly cruising by our cages, sometimes a little closer than anticipated, but I never felt scared! One of them came so close to me I stopped breathing in my regulator and couldn’t even take a photo. I was mesmerized by every tiny detail I could see of its skin, and eyeball (yes, it was that close!)

Having a great white shark look you in the eye is what the word awesome was really meant for. I was in a true state of awe, for sure! It’s difficult to describe the feeling of getting to do the one thing that has always been on my bucket list. Long before anyone called it a bucket list. As a kid, I thought it was just always going to be a dream. Going on this trip was exhilarating and I have so many adventurous stories and memories – and it’s kind of nice to have some bragging rights once in a while too. J  But it doesn’t have to be a ‘once in a lifetime’ trip … I’m already planning my next trip to Isla Guadalupe.


About Shark Diver. As a global leader in commercial shark diving and conservation initiatives Shark Diver has spent the past decade engaged for sharks around the world. Our blog highlights all aspects of both of these dynamic and shifting worlds. You can reach us directly at sharkcrew@gmail.com.
Posted by Horizon Charters Guadalupe Cage Diving at 11:15 AM No comments: