Goblin girl on.... diving with Herman!

A couple of weeks ago, I made something I've dreamed about for ten years now. It's not as cool as what most of the other people here get to do, but for me, in Sweden, this is about the best that you get!

Over the years, TV and newspapers that want to interview me have "dragged" me to our local aquarium here in Gothenburg. I always have to do the same thing: stand next to the tank or walk in the tunnel and stare at Herman - the resident sand tiger and KING of the tank. The aquarium is ten years old now and ever since they opened I've wanted to get into that tank!

We were filming a children's program that will be shown on Swedish telly in spring. Only, this time, instead of just gazing at Herman and the others, I was allowed to finally dive into the tank. I was in safe hands as I wasn't alone. My good friend Klas, who works at the aquarium, was with me. The last thing he said to me wasn't "Watch out for the sharks". No, it was "Remember they see EVERYTHING outside that window - LOOK GOOD!".

So down we went. Like ten times?! (Remember we were filming!) I'm such an inexperienced diver and those shallow depths... I was more like a yo-yo - trying to look GOOD! - than anything else.

Then he came, Herman. Out of the dark like a slow moving ghost. The other sharks: nurse, zebra and black tips kept their distance all the time. Even the often sulky sawfish was staying away. No, it would be impossible for anyone around to miss that Herman is the king of that tank.

I could of course understand that the guys filming me wanted me to be closer to the window, but that would mean no sharks close to the camera (we had no uw-cam) so I kept my distance. Maybe it's not the best time to practice your buoyancy when you are in a tank full of sharks, but since it's so seldom I get wet with a tank on my back, I took the opportunity (still trying to look GOOD). I think both me and Herman was kind of surprised when I suddenly were about to drop down on his head!

I've learned one very important thing from Manny Puig (we went snorkeling with great hammerheads once. Did I tell you about that?): always keep someone else in between you and the sharks! At least someone more experienced. So, I was very happy that Klas was with me when Herman decided to show us that we were invading his private space with our presence.

Like before, he came slowly towards us. Klas was little bit closer to him, when he suddenly turned 180 degrees, making a sound like a gun went off! It looked very much like when you see them testing the shark pod - only Klas hadn't done anything. Afterwards he told me that this is Herman's way to show that he is not too happy with us being there.

Anyway, we continued our dive for quite a while and nothing more happened. Then I had to break the surface a few times (for the show), but by then my ears were making so much unpleasant noise that it's only now that I start to hear ok again.

So, IF Herman had wanted to eat me he could easily have done that! And no, I wasn't really behaving "like you should around sharks", as I - as a very lousy diver - must have been making signals and noise like those of a whole shoal of wounded fish! Maybe he is just lazy and doesn't want to peel his food, but I think he knows me... After all, we've been seeing each other for ten years now ;-)


(The photo is an old one, showing me and Herman on one of our first dates.)
Posted by Hajcharlott at 11:16 AM No comments: 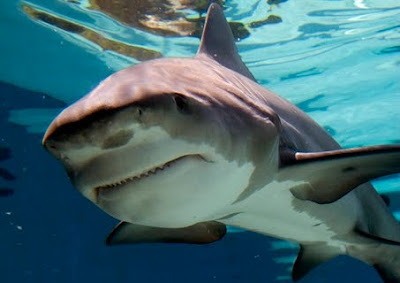 When we posted our challenge/half baked Internet observations to the science blog Southern Fried Science last week about Juicing Tweaked Bulls we never dreamed anyone would pick it up and run with it.

Yet run with it someone did, and the end result was quite remarkable.

Kudos to Giant Brain Christie Wilcox who's blog Observations of a Nerd took our rather pathetic post and made sense of the whole Bull shark testosterone mythos/phenomenon.

Christie Wilcox is a science writer/ blogger who moonlights as a graduate student. She blogs about whatever she feels like, usually relating to scientific news, interesting biological phenomena, and adorable creatures.

Christies post delves deeply into the zeitgeist of testosterone loaded Bulls. A commonly held belief that was cemented into the public's mind after this episode on Shark Week in 2002 "Bull Shark: World's Deadliest Shark."

Thank you very much Mr.Nigel Marvin and your millions of water cooler minions who went on to regurgitate this off the cuff shark factoids like some sort of never ending shark gospel.

For her shark smart, well researched post, Christie is now featured on this hallowed blog as a "blog to follow." Mainly due to the fact blogs like hers make ours look all science-y and stuff, and second off, hers is far more eloquent.

If the folks from Pew and the Bahamas National Trust have their way the Bahamas might be declared a shark sanctuary sometime soon.

That would be a good thing.

What is the current value of shark tourism to the Bahamas?

An industry study done in 2008 revealed the value of shark tourism to the Bahamas was roughly $78 million per year with over 44 thousand safe human/shark interactions per year by dive industry members.

That's where this recent article by the Tribune and associated quotes that went with it had us concerned. Not one shark diving industry member was mentioned in it, and no statistics concerning our industry either regionally or internationally were mentioned.

The shark diving industry has a lot to do with the perception of sharks and to tourism in the Bahamas. In short, regional industry players must be front and center with this push to protect sharks.

Perhaps it is time for Bahamas operators to get quoted and get out in front of this issue?
Posted by Horizon Charters Guadalupe Cage Diving at 7:50 AM No comments: