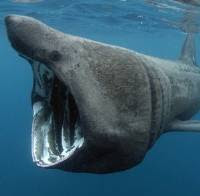 The Shark Alliance, a coalition of NGOs dedicated to restoring and conserving shark populations, yesterday condemned two illegal landings of basking sharks, both over seven metres and weighing roughly two tonnes, taken from waters off Greece within the span of a week.

The sharks were reportedly taken unintentionally by net fishermen off the coast south of Athens, one on 12 March and another just two days later.

The basking shark, the second largest fish species on earth, is protected under EU regulations and classified by the International Union for the Conservation of Nature as “vulnerable” to extinction in the Mediterranean.

Ali Hood, conservation director for the Shark Trust, a founding member of the Shark Alliance with a long history in basking shark conservation, said: “There are so few safeguards for sharks in Europe. It is critical that all existing regulations, particularly those for endangered species, are strictly enforced and that fishermen are educated about them.

“Fishermen must be made aware of the need to avoid netting basking sharks and the importance of carefully releasing and reporting any that are caught accidentally,” Mr Hood continued.

The basking shark landed on 12 March was sold at a local fish market. The shark’s huge liver is valuable for its oil which is used in cosmetics and pharmaceutical products.
Posted by Horizon Charters Guadalupe Cage Diving at 10:50 AM No comments:

After School Programs for "Little Monsters" 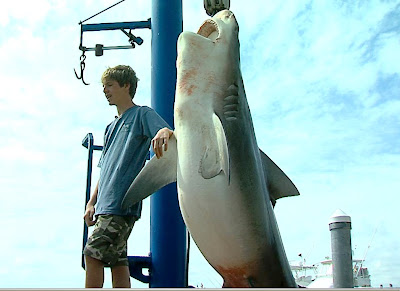 The State of Florida's - "State of Sharks" is at an all time low and we have been covering the decline.

As you know Florida banned all commercial shark diving in 2001, opening the door to 70's self styled shark killers, media seekers, and commercial tournaments.

This month thirteen year old Aidan Murray Medley reeled in another breeding aged shark for the media frenzy and a few moments of glory.

Young Aidan also wants to be a marine biologist when he grows up. For now though he's going after even bigger kills, claiming that the Great Hammerhead is next on his after school program "wish list".

Note to parents - have you considered team sports as a reasonable alternative for your sons continuing education?
Posted by Horizon Charters Guadalupe Cage Diving at 10:37 AM 2 comments:

The all new Dark Sands Vulcanus Resort and Spa in Tonga will give guests a $900 resort credit when they book a stay of five nights or more between March 29 and April 15, 2009. Nightly rates at the five-star luxury resort start at $1200 double occupancy (see video).

The credit can be used for a variety of amenities, dining and services, including treatments at the newly expanded, 27,000-square-foot Venus Volcano Spa - recently rated by Zagat as the hottest mud and steam treatments in the world:

The following Underwater Onion was brought to you by Shark Diver. We hear the mud baths at this resort will take your skin off.
Posted by Horizon Charters Guadalupe Cage Diving at 10:23 AM 1 comment: