Praise be to the Shark Gods, Buddha, Jebus, or who ever you praise be to-Gametaps giving something away for free. JAWS!

Now we know this blog is not about buying things, so when we heard that you can actually play JAWS for free, we had to go play for ourselves. In JAWS Unleashed you are a freakishly large great white hell bent on oceanic destruction. About the only thing you do not have in this bloody fun game are "Frickin Lazer Beams"...too bad

It's fun to be an apex predator chomping through boats, divers, girls in bikinis...and less.

Here's the trick, you need to download the game player, the whole set up takes about 5 minutes and then it's chomping time baby!

Cue the theme -- there's an oversized shark in the water with a taste for humans. The famous Great White has returned to terrorize the Amity shoreline in Jaws Unleashed, and this time, you control the shark! They're definitely gonna need a bigger boat.

Until December 31st and then you have to pay to play or go join a real shark diving company!
Posted by Horizon Charters Guadalupe Cage Diving at 5:41 PM 1 comment: 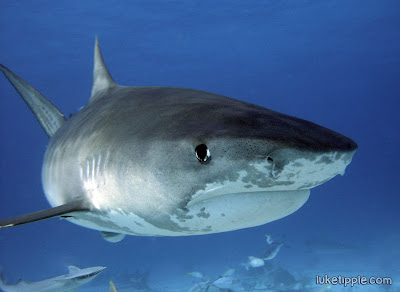 For the serious shark diver there's only two places on the planet where divers can get face to face with Tiger sharks. One of these spectacular dive sites is Tiger Beach located in the Bahamas. This unique-sandy bottom dive site allows divers and filmmakers unprecedented access while filming anywhere from 2-12 Tigers at the same time. Not to mention upwards of 40 Lemon sharks as well!

For the divers and crew of Shark Diver Tiger Beach is the perfect next step from Great White shark diving at Isla Guadalupe for those who want to discover the "Wilder Species" of sharks from sub surface state of the art cages and gates.

New for 2008 Shark Diver is working with the research vessel RV Tiburon and is now running 7 day charters from Freeport, Bahamas. This new dive schedule allows our divers a full extra day of shark diving over the old schedule out of Palm Beach, Florida.

The Shark Diver crew will introduce you to Tiger sharks ( Galeocerdo cuvier ) and Great Hammerheads ( Sphyrna mokarran) and "clouds" of Reef Sharks (Carcharhinus amblyrhynchos) up close and personal. Plus you'll get to snorkel and play with Spotted Dolphins, dive incredible sites complete with wrecks, reefs and more. Packing as much diving and shark encounters as they can into 7 days is what this is latest adventure is all about:

Posted by Horizon Charters Guadalupe Cage Diving at 9:43 AM No comments: 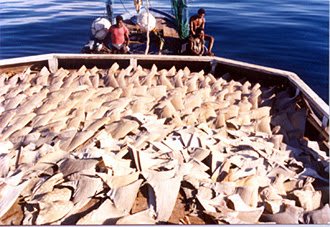 Gotta hand it to the Australians. While they have quite a few of the best sharks sites on the planet to either cage dive or rodeo sharks in for divers, they still have not quite figured out what to do with their whale sharks.

Whale sharks are the largest fish in the ocean-a quick run over to the good old Shark-Wiki tells us:

"This species, despite its enormous size (40 feet), does not pose any significant danger to humans. It is a frequently cited example when educating the public about the popular misconceptions of all sharks as "man-eaters". They are actually quite gentle and can be playful with divers. There are unconfirmed reports of sharks lying still, upside down on the surface to allow divers to scrape parasites and other organisms from their bellies. Divers and snorkellers can swim with this giant fish without any risk apart from unintentionally being hit by the shark's large tail fin."

So why is it that Australia enacted a series of rules and regulations that almost prohibit diving with these magnificent critters?

"This (code) includes a limit on the number of people in the water at any one time with the sharks, minimum distances that boats and snorkellers must keep from the sharks, and definitely no touching of the sharks".

The ONLY thing that will save the whale shark and sharks in general for the future-is divers seeing these animals in person. Too many sharks worldwide are being hunted for just their fins and the whale shark is on the top of that list. Divers who encounter these animals are 80% more likely to want to voice concern to local governments over issues relating to sharks.

Food, or soup for thought.
Posted by Horizon Charters Guadalupe Cage Diving at 8:03 AM No comments: