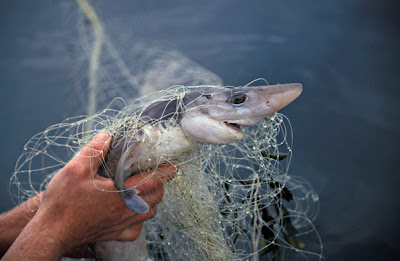 The Oregon senate approved a bill that would ban shark fin sales in the state with a titanic caveat, otherwise known as a loophole.

The bill makes an exception for spiny dogfish, a small shark that accounts for 300,000 pounds in landings by commercial fishermen each year and sport fishermen with a valid license are not affected. Additionally the bill carries a paltry fine of up to $720 for violators.

So what of these shark fins and the "possessing, selling, offering for sale, trading or distributing?"

Ya like Dags Blog has pre-emptive thoughts on that and we have to agree with their final summation.

While this is great news for sharks in general and a clear win for conservation:

"It’s interesting to see the compromise of the Federal law being mirrored on a state level with a different species. I wouldn’t be surprised if this becomes a bigger controversy down the road."

Major exports for spiny dogfish shark fin harvested in the U.S are Asian markets.
Posted by Horizon Charters Guadalupe Cage Diving at 11:41 AM No comments: 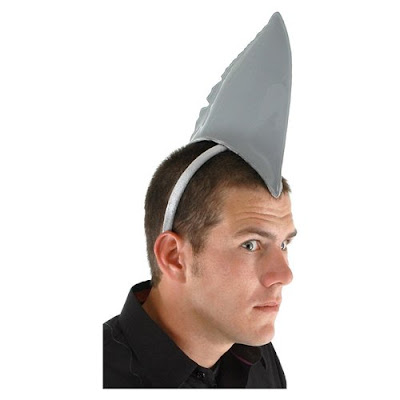 A recent article has popped up in the mainstream media about some industry folks in Australia who claim that blasting AC/DC underwater attracts white sharks, oh, and the white sharks "love it."

Naturally we have to call bull-shit on this one.

Folks, as long as we have been in the shark game, going on for over a decade now, we have seen every kind of shark attraction device known to man - and a few that defy description.

Blasting AC/DC underwater is not new, it is not innovative, and dare we say it is a complete and utter disservice to the animals that we make a living with.

It's the kind of best practices garbage that you just do not see with terrestrial animal tourism.

Where are the megawatt speakers blasting the sound track from Zanadu in the Gombe National Forest? We're pretty sure that someone without a PhD, and who's vested interest in the wild animals that inhabit this park could come up with some half-assed observation about chimpanzees "rocking out" to techno funk from the 1970's.

The fact is, folks like us make a living "with" wild animals, not "from" wild animals and that's a distinction that many within the shark industry have forgotten, or have conveniently decided to ignore as they chase sharks around the world.

Worse yet some within our community are now throwing up a thin excuse for bad behavior with sharks as calling it "conservation", which is the next iteration of the AC/DC and white shark argument.

Last week we saw a video featuring a woman, dressed as a mermaid, free diving in 500 feet of water with white sharks at Isla Guadalupe, no cages, no dive safety team, all under the mystical caption of "conservation".

What's starts with basic disrespect for wildlife, leads to all manner of lunacy with sharks under many guises.

White sharks have been around for the past 300 million years in perfect balance with nature and none of that nature included mermaids, simians riding on fins, or AC/DC.

Are we fortunate enough to spend time in the presence of white sharks, or do we have to completely and abjectly modify the shark encounter to suit our tastes as top water interlopers, surviving in their environment in what amounts to crudely designed life support gear?
Posted by Horizon Charters Guadalupe Cage Diving at 8:41 AM No comments:

We have been waiting for David Diley's first foray into the world of sharks on film, from the looks of things, a lot of bars are about to be reset.

Filmed on location in Mallorca, "Behind Blue Glass" tells the story of Mallorca's history and tradition with the Great White Shark and in which, seven unwitting volunteers come face to face with sharks and in doing so, send out a powerful message in favour of the conservation of these awe inspiring animals.

Posted by Horizon Charters Guadalupe Cage Diving at 8:16 AM No comments: 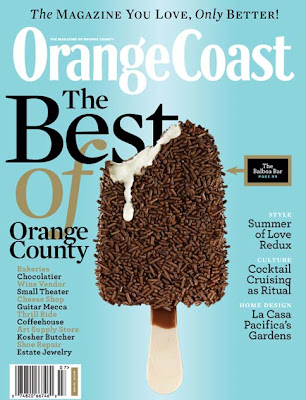 OC Magazine (Orange County California) is the gold standard for regional happenings and local interviews with highlights of OC luminaries.

One of these was our very own Richard Theiss from RTSea Productions who, for the past 30 years has been one of California's premier underwater and above water cameramen, directors, and production developers.

You can read the interview here, like his blog (which recently garnered the attention of Nat Geo Magazine) it's a great read.

Richard Theiss on OC Magazine.
Posted by Horizon Charters Guadalupe Cage Diving at 8:05 AM No comments: