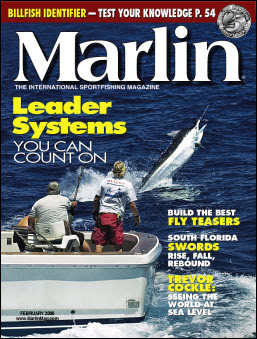 Marlin is the premier big game sportfish magazine, and many kudos to the editors for taking on sharks and shark sportfishing over the past three years.

The Marlin sport fishing story is one of industry leadership spanning 30 years, with the realization that a once vibrant sport fishing industry and resource (Marlin) was in decline. Members of that community banded together to create, foster, and grow a first class catch and release ethic for the entire generation.

To see members of this community reach out and embrace sportfishing for sharks in a sustainable manner is real leadership and deserves notice.

This month Marlin highlighted Guy Harvey's efforts to bring sportfishing tournaments for sharks into the catch and release mindset.

This growing effort, while featuring the Guy Harvey name, also encompasses a small army of dedicated sportfishing industry leaders and enablers who have been the nuts and bolts of this industry shift.

Exposure by the folks from Marlin magazine is not only helpful, but it takes the conversation about sharks and sportfishing into an industry mindset and about good resource management.

For sharks, and the next 40 years, time will tell if the efforts put forth by many today will in fact slow the tide of loss enough to keep stocks from collapsing entirely.
Posted by Horizon Charters Guadalupe Cage Diving at 7:32 AM No comments: