Pulled off the Internet and on to your desktop this morning...and we're not making this up.

What you are looking at is a nasty little invasive species of predatory fish from Asia called the Giant Snakehead.

The problem with this critter is what it eats, pretty much everything in sight. Naturally the good fisherfolks in the U.K do not want this fish in their waters and were dismayed when someone caught about a two feet long specimen last week.

Here's where it gets interesting:

"Giant Snakeheads caused chaos to indigenous fish and the environment when they were found living in rivers and lakes in the U.S. in 2002. Snipers with high-powered rifles even set up watch to shoot the fish as they crawled ashore and entire lakes were poisoned to get rid of them."

God bless America, take heed U.K people, we have plenty of high powered red necks with guns willing to come to your country, drink beer, and shoot fish off your banks...just give us the word!
Posted by Horizon Charters Guadalupe Cage Diving at 7:27 PM No comments: 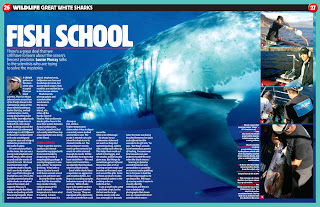 When you have a shark diving company like ours you get hit with media requests almost daily.

Recently we just completed a three part article for a German Magazine due out in April. The trick with working with the media is credibility. Never do anything that makes you, the sharks, or your operation look like an idiot. This is just Media 101.

That's a trick here is most media sources come to you with a basic Discovery Channel understanding of how sharks work. It's our job to introduce them to an expanded view of things.

In all media is fun to work with and we have been blessed to work with some of the greats over the years producing what amounts to a massive amount of positive press for both us and the sites we operate in.

After all, we're on the front lines of not only shark research, as is the case of our Isla Guadalupe site, but if we say so ourselves, we run a pretty cool little operation as well.
Posted by Horizon Charters Guadalupe Cage Diving at 5:08 PM No comments: 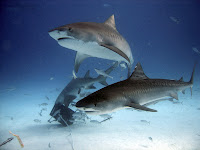 In a quick reaction to unprecedented pressure from groups world wide South African authorities raided the home and then charged a man today for the killings of 8 Tiger sharks.

Aliwal Shoal Marine Protected Area on the KwaZulu-Natal south coast was the site of the recent shark slaughter, witnessed by shark eco tour operations and surfers.

"Conservationists are furious not only because is it illegal to catch tiger sharks in the protected area, but Aliwal Shoal is one of the top dive sites in the world."

As we commented in our blog on this subject a week ago, Marine Protected Areas are the key stone to protecting sharks. As unofficial site guardians, shark diving companies are often the first to report misdeeds at the hands of those who would harm sharks for either sport or profit.

The staff of Shark Diver remain committed to ongoing reporting of these important stories. With sharks being slaughtered by the millions each year and populations falling worldwide it might well be these few protected areas that save entire species in the years to come...if we can protect the sharks in them.
Posted by Horizon Charters Guadalupe Cage Diving at 3:42 PM No comments: 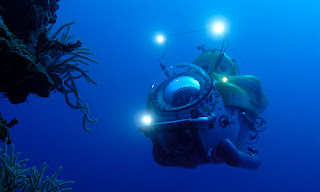 We tracked down famed underwater shooter and Editor at Large Ethan Gordon (hat tip image) to get his take on underwater photography and the future of his industry:

1. UW photography has changed from film to digital and with it an entire industry, your take?

Digital photography has definitely "upped" the game. Now amateurs can accomplish what only the pros could do before. However, this also works to the advantage of the pros - we can now do things we never thought possible before. I think it has also been great for diving in general - there are now lots of divers who are enthralled by their point and shoot digital camera results - this keeps them diving. Remember the days when people used to travel with a bag full of film, only to return home to find out they had their camera set wrong all week?

2. As harder dive sites and rarer animals are recorded at a seemingly record pace, are we running out of new things to shoot?

It's getting harder to find new things to shoot, but we'll probably never run out of those. On the other hand, this might be a good time to take a new look at sites and creatures we've taken for granted.

3. Innovation vs status quo, what's your take on the new generation of UW shooters?

I think there is a new, very talented generation of UW shooters out there. They're tech savvy, creative and hungry to shoot.

4. Latest promising tech for shooters, do you have a favorite?

The new generation of digital TTL systems will revolutionize UW photography once again. Gone will be the days of having to think about your aperture and distance to subject. The electronics are almost there... maybe they've already arrived.

5.Crystal ball time-what's the future of UW photography and magazines that serve these images?

A sad reality hit me recently when I was presenting a slide show to a local Audubon chapter. I was showing slides of sharks and talking about the woes of shark finning. I was shocked when I realized that almost no one in the room had ever heard of this atrocity. The group was largely made up of non-divers, but I falsely assumed that this was a known problem.
The underwater photography out there in magazines today is the best ever. But, if we want to see it continue... the underwater environment continue to be spectacular, then everyone that subscribes to a dive magazine has to convince their friends (non-divers) to start to take an interest too - before it's too late. And, every diver that doesn't support the mission of these magazines by subscribing, well, shame on them.
Posted by Horizon Charters Guadalupe Cage Diving at 11:34 AM No comments: 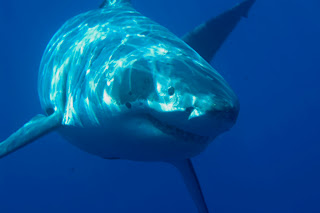 You gotta hand it to the TOPP's people (Tagging of Pacific Predators). They recently announced new findings from over 100 high tech sat tags placed on white sharks all over the Pacific in 2006. This last year was one of the most ambitious tagging projects on record:

"Every winter the sharks leave California's coast for one of two destinations. A minority of sharks head to the Hawaiian Island chain. The majority, however, congregate in a part of the open ocean halfway from California and Hawaii, 1,300 miles from land. Researchers have yet to uncover what attracts the shark to this particular spot. During these journey the sharks will occasionally dive up to a quarter-mile beneath the surface and stay at this depth, where light barely penetrates, for hours. On returning to California, the sharks display remarkable site-fidelity, always heading to the same area of coast they left before. “These animals appear again and again at very specific areas,” Salvador Jorgensen says, a postdoctoral researcher at Stanford University's Hopkins Marine Station and the Monterey Bay Aquarium".

Isla Guadalupe island located in Mexico plays into this ongoing migration drama every year with animals returning every season after visiting the same sites as their California cousins. Making the Pacific a very small body of water after all.
Posted by Horizon Charters Guadalupe Cage Diving at 11:07 AM No comments: