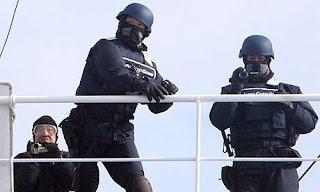 Something is not right about the latest action on the Southern Ocean. At hand claims and even a video showing what looks like a shot through a bullet proof vest worn by Sea Shepherd's Captain Paul Watson.


In this video he claims to have taken a direct round to the heart region. For all intents it looks like he has, with the bullet passing deeply into the vest only to be stopped dramatically by a shield he was wearing below the vest.

The media are having a field day with this.

Now let's break this one down.

1. The shooter, presumably firing from the Nisshin Maru, was in a concealed position when he fired that shot. Not one of the Sea Shepherd crew maintain they saw anyone with a rifle on board. So let's assume concealment as being out in the open would have given the shooter away.

2. Both the Nisshin Maru and the Sea Shepherd vessel were underway at the time and on moving seas. The shooter had to adjust not only for random waves and distance, but from a concealed position had to account for wind, also assuming that Watson was moving around as well at the time.

3. To make that one shot, and were not talking about a stationary book depository in Dallas, the odds are almost incalculable that the shooter got Waston directly over the heart with just one single round. It's a simply amazing shot.

Now for the real question, "why?"

Why would the Japanese government risk everything by trying to kill Captain Paul Watson?
Clearly had this shot killed Watson they would have lost everything they have worked for to date with the International Whaling Commission and with world opinion. Watson would have become a Whale Martyr and whaling as we know it would stop due to unprecedented pressure from outraged group worldwide. What was in it for Japan to even attempt to try and kill this extremely high profile whale activist in full sight of multiple cameras and witnesses?

They did use flash bang grenades and it was caught on tape, but the single shot?

To penetrate a Kevlar or ballistic vest from a distance you need at least a 7.62 mm round. Obvious choices would be military rounds with some sort of armor piercing capability. That is assuming the shooter knew that Watson was wearing a bullet proof vest in the first place. Obviously from the penetration the shooter understood this, otherwise this kind of round would have passed through Watson and rattled around the ship.

We'll be the first to say that what Japan is doing is wrong. Whaling should end. What Watson and Sea Shepherd have done with this claim is raise the credibility stakes of both sides to an absolute win or lose scenario.

Japan and Waston should call for an independent commission to look at both the vest and the recovered spent round to determine where it came from and what type of round it was. If it is proven that the round was fired by the Japanese they should be forced to end whaling. This was attempted murder, nothing more or less.

If Paul Watson made this story up, the credibility of Sea Shepherd will be forever lost, their status as a non profit should be pulled, and Sea Shepherd should go away.

Time will tell, but probably not the shooter in this case, whoever it was.
Posted by Horizon Charters Guadalupe Cage Diving at 5:49 PM 12 comments:

Just when you thought this years Southern Whale hunt could not get any more dramatic, there's word today that Captain Paul Watson of Sea Shepherd has been shot. He's unharmed...and talking to the media.

One question, why was Paul Watson wearing a Kevlar vest in the first place?

CNN-Japanese whalers and anti-whaling activists clashed in the waters near Antarctica on Friday, with each side offering conflicting accounts of a confrontation with violent overtones.

Watson was shot, the group said, and two others were injured. A 35-year-old from Australia hurt his hip trying to dodge a flash grenade, and a 33-year-old Australian received bruises after a flash grenade exploded near him.

"They might have mistaken that was a shooting sound," the official said. "We are not shooting a gun or anything at them."

Posted by Horizon Charters Guadalupe Cage Diving at 8:07 AM No comments: