Ahhh yes, this mornings coffee spilled all over the keyboard thanks to this video from Florida:

Posted by Horizon Charters Guadalupe Cage Diving at 7:31 AM No comments:

Conservation (hic) Drinking for the Sharks 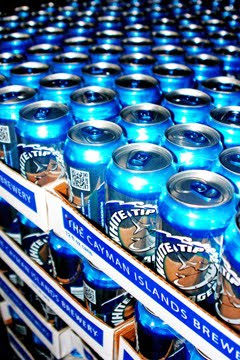 Especially ones that generate funds for sharks.

Welcome to White Tip Lager Caybrews latest tasty lager in a partnership between the brewery and the Cayman Island Department of Environment.

The Cayman Brewery is also using the White Tip Lager to save marine wildlife.

“The Department of Environment’s Mat Cottam came to us and asked if there was there any chance of us actually partnering with them to use beer as a vehicle to push conservation and awareness in the Cayman Islands,” Mr. Mansfield said.

“Beer’s more interesting than a brochure usually,” said Mr. Cottam, manager of the Terrestrial Ecology Unit at the department, “and they were completely for it, they thought it was a great idea.”

The White Tip label was designed to promote awareness about dwindling shark populations worldwide and the environmental significance of this misunderstood predator.

The beer can is covered in snippets of information, as well as a 2D barcode that smart phone users can scan to be directed to the Department of Environment’s web page of shark information.

In addition to being a drinkable source of information, beer sales will also contribute to the department’s shark conservation efforts monetarily: Five cents from each can sold will go towards shark research, awareness and conservation programmes.

Story here.
Posted by Horizon Charters Guadalupe Cage Diving at 6:38 AM No comments: