Greenland Sharks "Monsters" of the Arctic

And you thought Canada was one of the least sharky places on the planet...think again. This week Canadian biologists are tagging and tracking this cold water "denizen of the deep" in an effort to understand more about them.

These are the same critters accused of stalking and graphically de-rubberizing young seals off the coast at Sable Island.

Canadian fish scientists are opening a window into the mysterious world of the Greenland shark -- the top predator in the Canadian Arctic about which almost nothing is known.

Except this, says Steve Campana of the Bedford Institute of Oceanography: "These are very, very strange sharks."

Its meat is poison. Its mouth is far under its body. It has almost no spine. It's so lethargic that it doesn't even snap at the scientists who hook it and attach a radio to it.

In the eastern Arctic "this is the apex (top) predator, the king of the food web, along with the polar bear. There's a sister species in the western Arctic. And as with any ecosystem, if you don't know anything about the apex predator, you're in a lot of trouble figuring out what's going on."
Posted by Horizon Charters Guadalupe Cage Diving at 2:39 PM No comments:

Christie Fisher and "One Eyed Jack" 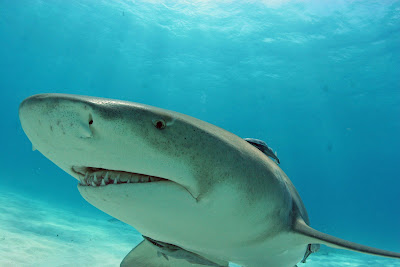 The two images you are looking at were taken at Tiger Beach in 2007 and 2008. Shark Diver Christie Fisher has been diving with us for 4 years now. She's also been honing her underwater shark photog skills. To say she's become fearless in her new pursuit is a complete understatement.

In 2007 she was introduced to a frisky Lemon shark who's one eye was damaged beyond repair. This particular animal from the looks of things took a "liking" to Christie.

This week she was going 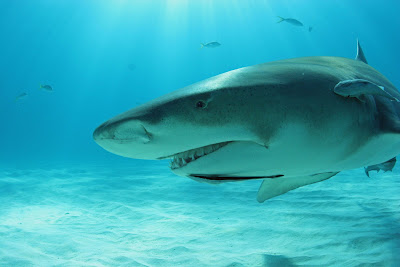 through her images and emailed us:

"This is the SAME shark (One-Eyed Jack)!! I was looking
through last year's pictures tonight and noticed the eye again."

There's a lot going on at Tiger Beach with the sharky wildlife at this site. Having the same Lemon shark in what is usually a complete cloud of critters show up two years in a row is why divers come here year after year.

For Christie it's just another day at her new office in the Bahamas.
Posted by Horizon Charters Guadalupe Cage Diving at 12:07 PM 1 comment:

The term has come to be known when a website, film/television franchise or company is at or near it's end-pulling one last stunt in an effort to get ratings.

For Fonzie and the gang this was the last hurrah. Old school Bikini's and all.

This moment in television we found on You Tube and here it is. One question: "who shot the original Tiger Shark footage for this show?"

Posted by Horizon Charters Guadalupe Cage Diving at 8:20 AM 6 comments:

This was sent in by one of our blog fans who discovered researchers in New Zealand about to dissect and blog about a Pygmy Right Whale.

These rare critters do not seem to be a part of any main whale evolutionary tree.

The blog is fascinating, and at times a bit gruesome but it does shed light into the world of whales.

Make sure you are not eating lunch... and thanks Ellen!
Posted by Horizon Charters Guadalupe Cage Diving at 7:16 AM No comments: