Sharks and Neptunic-Black and White Bliss 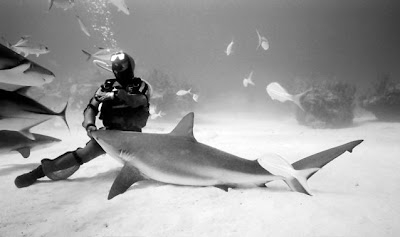 Jeremiah Sullivan-the genius behind Neptunic Shark Suits recently returned home from several new "adventures with sharks" which we're sure you'll be seeing and hearing about in the weeks to come.

He did have time to send in this image which sums up these sharky adventures nicely.

Is it just us, or do sharks always look better when you take the time to shoot them in black and white?

With the exception of Wolfgang, no one does this brand of underwater photography better.
Posted by Horizon Charters Guadalupe Cage Diving at 7:43 PM No comments: 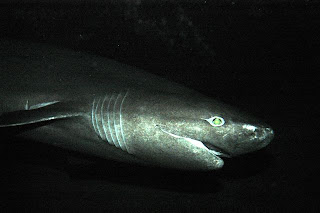 If you were not at the Northwest Dive Travel Expo last weekend you missed one of the most exciting dive operations to hit the West Coast in the past 5 years.

Hydrus has pioneered Six-Gill caged shark feeding encounters in the waters off of the Pacific Northwest. Thus far Team Hydrus has played host to many of the old timers in the film and dive industry who are always first to "sniff out" the next big thing. Howard Hall and company to mention some names.

"We were the first team in history to successfully attract and dive with Six Gill Sharks in shallow water while the animals were feeding. Over a 5-year period we created a one-of-a-kind program to attract Six Gill sharks. During those years we documented animal behavior never seen before by scientists, started documenting the behavior of individual animals, designed and build many custom pieces of equipment to enhance the observation experience, and conducted a “proof of concept” event at the Seattle Aquarium, which helped them start their Six Gill Shark research program."

Dust off those camera housings and seal up that dry suit...it's Six-Gill time!
Posted by Horizon Charters Guadalupe Cage Diving at 3:20 PM 1 comment: 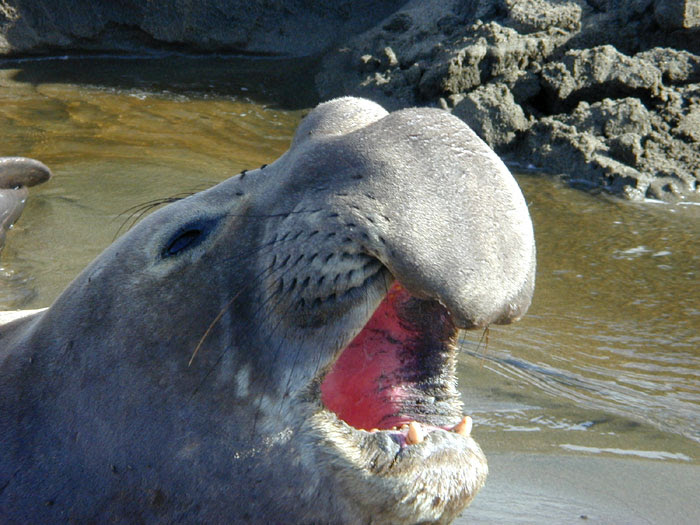 This ugly eco news was almost inevitable. With salmon stocks up and down the California and Oregon coast disappearing at an alarming rate, the natural predator gets the bad rap.

In this case the seal. Sadly several elephant seals were also shot on California's central coast this week as well.

PORTLAND, Ore. (AP) — For years, the sea lions lounging at the Bonneville Dam have had easy pickings from salmon waiting to go up fish ladders to upriver spawning grounds.

Over the weekend, the federally protected sea creatures were themselves easy prey for a gunman who shot and killed six of the sea lions as they lay in traps meant to humanely catch them.

State and federal authorities were investigating the shootings, which came less than two weeks after an appeals court issued a temporary injunction against authorities killing the salmon-gobbling mammals. Agents have been trapping them instead, but trapping will be suspended during the investigation, said Rick Hargrave, a spokesman for the Oregon Department of Fish and Wildlife.

Fishermen and American Indian tribes have pushed to protect the salmon and remove the sea lions, by lethal force if necessary.

The carcasses of the four California sea lions and two Steller sea lions were found Sunday around noon below the Bonneville Dam on the Columbia River on the border of Oregon and Washington.

The six animals appear to have been shot by somebody on the Washington side during the night, said Brian Gorman, a spokesman for the National Marine Fisheries Service.

Posted by Horizon Charters Guadalupe Cage Diving at 7:57 AM 1 comment: