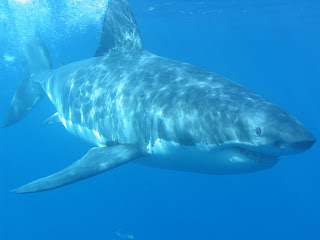 "Actually, the boat had just finished doing a shark dive, and were getting ready to go back to shore. There were plenty of sharks in the water, according to our daughter who was a volunteer on the boat."

Three tourists who died in a shark-diving boat accident were identified on Monday by Western Cape police.Two men from the United States and one from Norway died when their shark-diving boat capsized near Kleinbaai on Sunday,

The two Americans who died in the accident were named as Cassey Scott Lajeunesse, 35, from Maine and Christopher Tallman, 34 from California.

Kenneth Roque from Moss in Norway was the third victim.

"Nine crew members and nine other tourists survived the incident and were treated for injuries and shock" said police spokesperson Andre Traut.

On Sunday, National Sea Rescue Institute (NSRI) spokesperson Craig Lambinon said the boat that capsized was a 36 foot White Shark Projects boat. Chairwoman of the Great White Shark Protection Foundation, Mariette Hoply, said the shark-cage diving boat had anchored just before a freak wave struck it around 10am on Sunday, causing it to capsize.

The boat's crew had not started shark-cage diving when the wave struck. - Sapa
Posted by Horizon Charters Guadalupe Cage Diving at 8:04 AM No comments: