Amanda Cotton Gets a Blog-Kudos 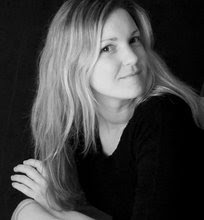 It is refreshing to see the up and coming faces of underwater photography. Those shooters who, for the pure joy of the image, end up taking shots that have the potential to change the way we see things.

One of these people is Amanda Cotton whose black and white imagery of large predatory sharks strikes the right note about these animals in ways color photography cannot. As we blogged about her a few months back, "when shooting in black and white you are forced to tell a story to make the shot work, Amanda's work is just plain organic".

We discovered this week she launched a new blog (and the shark crowd goes crazy).

Kudos Amanda, while your images give voice to the sharks now it's time for you to give voice to your images...oh and we'll be here to help as well.
Posted by Horizon Charters Guadalupe Cage Diving at 5:29 PM 5 comments: 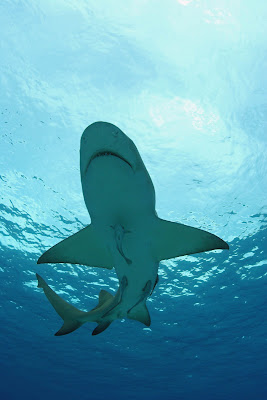 When Christine Zenato teams up with Protect The Sharks Foundation only good things for both the Bahamas and for the sharks in the region can come of it:

Grand Bahama Island - UNEXSO was pleased to host for a second time Protect The Sharks Foundation which is a non – profit organization based in The Protect the Sharks Foundation is trying to convince people how important it is to save sharks and in particular stop shark finning.

With this in mind Geert Droppers the founder is producing educational films aimed at showing the beauty of the shark and dispelling all the myths about “that dangerous monster.” Last year on his first visit to UNEXSO he filmed a documentary “Gimme A Hug” with Cristina Zenato, UNEXSO Diving Supervisor and Dive Instructor who is recognized as a Shark Dive professional.

It is a short film aimed to create awareness and a better understanding of this misunderstood animal. It is being distributed world wide and has already received outstanding reviews at film festivals in This year Geert returned to UNEXSO to dive with Cristina and show the beauty of the local Caribbean reef sharks and further develop “Gimme A Hug” for release in The film will highlight that there is no need for the mass slaughter of sharks for their fins in an area of the world where Shark fin soup is a delicacy.

The group was joined by 12th Grade Marine Science students from together with their teacher Andy Loveitt. They were interviewed and then participated on a shark feed under the watchful eye of Christina and Andy.
Posted by Horizon Charters Guadalupe Cage Diving at 5:19 PM 1 comment: 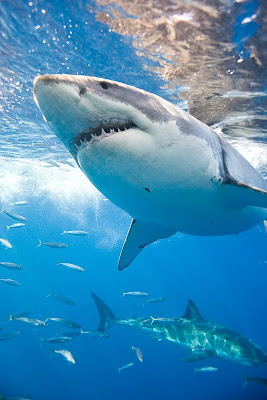 Clinton Duffy is busy in New Zealand tagging white sharks. With each tag he and his team get in the grander the mystery they unravel about these magnificent animals migratory patterns:

Seeing a great white shark next to the boat is close enough for most people.

So imagine the nerves needed to haul one of the ocean’s most feared predators onto the boat to tag it. For Conservation Department marine scientist Clinton Duffy, it’s all in a day’s work.

Next month, Clinton will hunt for great white sharks in the Far North in a bid to learn more about this species which is declining worldwide thanks to trophy hunters, shark control programmes, accidental capture in gill nets and vulnerability to over-fishing.

Tagging great whites with satellite tags will allow Clinton to capture data on light levels, temperatures and depths experienced by sharks. His research has already debunked the image of great whites as cold water, coastal sharks.

Previously tagged sharks have been found as far away as Tonga, New Caledonia and the Great Barrier Reef and recorded diving to depths of 1000 metres. Scientists have also discovered that great white sharks make trans-oceanic migrations to tropical waters.

They don’t know for certain why great whites take winter holidays in the tropics. However, they may be searching for humpback whale calves, because a lot of tags have surfaced in or near calving sites.

Mr Clinton will talk about his work at the Houhora Big Fish and Sports Club on Friday at 7pm.

The evening promises to add a different perspective on the ‘Jaws creature of terror’ image that still plagues this vulnerable fish.
Posted by Horizon Charters Guadalupe Cage Diving at 4:56 PM 1 comment: