Jimmy Hall And His White Shark

Does anyone remember this video?

We do, and we also remember the guy who shot it as well. Jimmy Hall was the best of everything that the dive industry has to offer. An original, a genuinely nice guy, and an adventure seeker.

Sadly, he passed away last year, but this video stands as a testament to someone who loved animals and loved the ocean. The dive industry has few replacements for Jimmy:

White Shark Researchers Have All The Fun 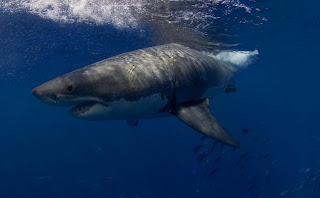 The shark guys over at TOPP's seem to have the all the fun when it comes to white shark encounters at San Francisco's Farallone Islands.

This unique site is home to some truly giant white sharks. The problem is since new rules and regs curbing everything from towed decoys to how close you can actually get to a fresh seal kill, the site is just not as fun as it used to be.

Still, if this latest video is any indication, the science guys out there are not limited to the same rules the commercial guys are. Wonder how much they charge for a full day of serious sharking on their boat?

Cheesy music aside, this was what it used to be like years ago:

The crew from TOPP's have been toiling away for the past few years in New Zealand, tagging monster bluefin tuna.

Turns out they are not the only ones interested in some of the last stocks of these magnificent animals left on the planet.

Bluefin are some of the rarest and most valuable tuna on the market with some animals fetching upwards of $80,000...for one fish!

Tuna is also the favorite food of great whites at Isla Guadalupe where the mighty bluefin were once as plentiful as sardines at this dive site.

Here's the local story. The picture features a guy who's been eating nothing but bluefin for his entire life and now has the strength of 12 men.

O.K, that part was an onion, but the rest of the story is pretty amazing, now where did we put that fishing gear?
Posted by Horizon Charters Guadalupe Cage Diving at 2:51 PM No comments: