When Shotguns and Sharks Do Not Mix

As for these guys, feel free to express your opinion on the comments section: 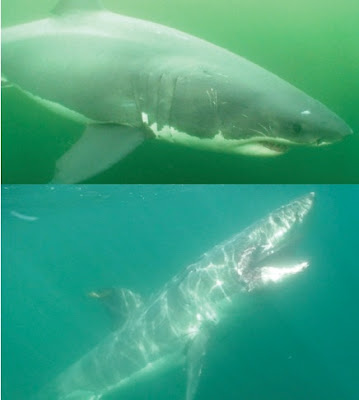 In 2009 NOAA's Office of National Marine Sanctuaries enacted a series of white shark viewing and interaction protocols at the Farallone islands that, by any account, were the most restrictive on the planet.

New regulations prohibited "all activities that would attract white sharks anywhere in the Farallones sanctuary. “Attracting” the sharks means any activity that lures or may lure a shark by using food, bait, chum, dyes, decoys (e.g., surfboards or body boards used as decoys), acoustics or any other means."

Additionally it became illegal to "approach a white shark within 50 meters or 164 feet within two miles of the sanctuary (15 CFR Part 922)."

While sanctuary managers were congratulating themselves on these new rules, they were also green lighting a unbelievable hybrid film and television/shark research project that would allow film crew members (not researchers) to actually bait, hook, and land white sharks within sanctuary waters where a team would then drill into the sharks dorsal fin attaching tracking devices.

One of the team members for this project was in fact a Hollywood actor.

White sharks have enjoyed protected species status in California waters since Jan. 1, 1994. Title 14, California Code of Regulations, Fish and Game Code Section 28.06 on page 25 of the California Sportfishing Regulations states that "white sharks may not be taken under a sport fishing license. Commercial fishing operations may not target white sharks, either."

The management team at the Farallones made the decision to allow invasive research within the sanctuary in 2008/09. At the same time they were shepherding in additional rules and protocols for viewing and interacting with white sharks that would keep the general public 164 feet away from these same animals.

Sanctuary Superintendent Maria Brown's staff were also on the film vessel as observers when the first shark was badly hooked in the throat. To release the animal film crew members (not researchers) had to push a pair of industrial bolt cutters through the sharks gills cutting only 10% of the massive hook, the rest was left inside the animal.

When word of this disaster leaked out Maria Brown made the management decision to continue with the project. The next few days saw another shark hooked and tagged within the sanctuary boundaries.

Maria Brown then went on record in an ABC News interview to describe the process "as a minor dental procedure," see video.

As images surface this week of a shark named Junior with what looks like one of the tags that were placed in 2009 and a simply massive infection/tumor on the side of it's face we are calling for a complete investigation of Maria Brown and all documents, emails, contracts, letters and digital media involved in this project.

The public deserve a complete and transparent accounting of how this project came into being and what sanctuary managers were thinking at the time. A recently released and almost amusing "independent review" by Maria Browns office is a case study in political CYA and does nothing to enlighten the public trust in NOAA or the sanctuary system.

Researchers estimate that there are as few as 300 white sharks at the Farallone islands and surrounding region. This underweight animal, if in fact is confirmed as the shark that was badly hooked in 2009 with Maria Brown watching, will not survive much longer in this state. It is no longer a robust breeding animal and as such can be considered a loss to the entire population base.

Will NOAA rise to the challenge for a protected species?

Posted by Horizon Charters Guadalupe Cage Diving at 8:11 AM No comments: