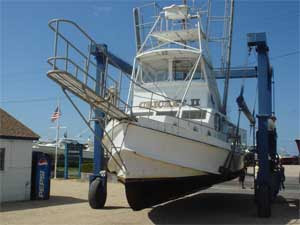 When word came out notorious shark killer Frank Mundus estate was to sell the Cricket Two, as media folks, we became very interested.

As a pro shark media platform this vessels sordid shark history and back story would have been be a slam dunk. The vessel and captain that inspired the character Quint from Jaws made the acquisition of this vessel for shark conservation efforts more than an idea.

That's when things went wrong for us. The vessel went on the auction block with final bid numbers as high as 300K being tossed around by the media. We wanted nothing to do with that and made a preemptive offer in December of slightly more than 150K to the auctioneer via the Mundus estate.

We were turned down. Then a few weeks later out of the blue asked again if we wanted to get involved in the auction for the Cricket Two. The answer from our side was no, but was the estate looking for a preemptive buy out? No.

The auction for the Cricket Two is officially over. The winning bid $50,000. Less than the minimum 100K wanted by the Mundus estate. Today, as we feared, locals in the region are discussing a series of memorial shark fishing tournaments to raise the other $50,000 for the Cricket Two.

It would seem shark conservation will take a back seat to the Mundus legend - all for the lack of imagination of one auction house and the Mundus estate.

The offer was valid. Greed got in the way of acquiring the Cricket Two.
Posted by Horizon Charters Guadalupe Cage Diving at 6:25 PM 4 comments:

Santa Cruz - Shark researchers with the Pacific Coast Research Center have announced the discovery of a new white shark sub species at famed California big wave surf spot Mavericks. Following a recent attack on a surfer where a single 2 inch tooth was recovered from the surfers leg, marine biologists have confirmed this attack was from a hereto unknown subspecies now being called the "Unidenta'tus Carcharodon" or "Single Toothed Carcharodon".

"We estimate this animal to be at least 14 feet long with one very large tooth in the middle of it's mouth" said David Munns spokesman for the PCRC. "There's really no other explanation for the single tooth and corresponding video we saw on You Tube":

The following Underwater Onion was brought to you by Shark Diver. Always check your media.
Posted by Horizon Charters Guadalupe Cage Diving at 6:49 AM 1 comment: