Island of The Great White Shark-Documentary

By now you have heard about the new white shark documentary-Island of the Great White Shark. Richard Theiss spent the last 4 years documenting the research work that Shark Diver started with the help of Mexico's CICIMAR and U.C Davis.

The project is almost complete and sheds light on white shark tracking and behaviour at the island that was unknown until this data was gathered.

Posted by Horizon Charters Guadalupe Cage Diving at 11:23 AM No comments:

And you thought we would never get around to blogging about the Giant Squid again.

The AP reports today that researchers in New Zealand, home to perhaps more giant squids than any other place on the planet (betcha didn't know that) have concluded that their critters have the largest eyes of any animal on the planet.

WELLINGTON, New Zealand (AP) — Marine scientists studying the carcass of a rare colossal squid said Wednesday they had measured its eye at about 11 inches across — bigger than a dinner plate — making it the largest animal eye on Earth.

One of the squid's two eyes, with a lens as big as an orange, was found intact as the scientists examined the creature while it was slowly defrosted at New Zealand's national museum, Te Papa Tongarewa. It has been preserved there since being caught in the Ross Sea off Antarctica's northern coast last year.

"This is the only intact eye (of a colossal squid) that's ever been found. It's spectacular," said Auckland University of Technology squid specialist Kat Bolstad, one of a team of international scientists brought in to examine the creature.

Posted by Horizon Charters Guadalupe Cage Diving at 10:36 AM No comments: 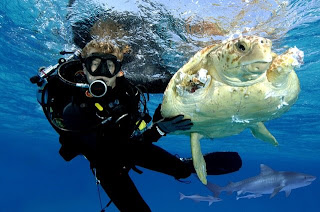 For the past 8 days Shark Diver's Luke Tipple has been the dive safety operations manager for a simply massive film crew, shooting Tigers and Dolphins in the Bahamas.

The shoot spans three continents and is styled after Blue Planet. While they are still in production we cannot give you any more details, we'll update you as soon as we can.

We can share with you this image he sent into the office this morning.

What you are looking at is "Raw Nature" to quote Luke (*add Australian accent here) a green turtle who lost out on a turtle vs tiger encounter off Tiger Beach last week.

It looks like this little critter had quite the rough time of it. When you're a turtle and you show up to Tiger Beach, it's like driving through a bad neighbourhood. Always keep your doors locked, drive fast, and do not stop for gas late at night.
Posted by Horizon Charters Guadalupe Cage Diving at 9:49 AM No comments: