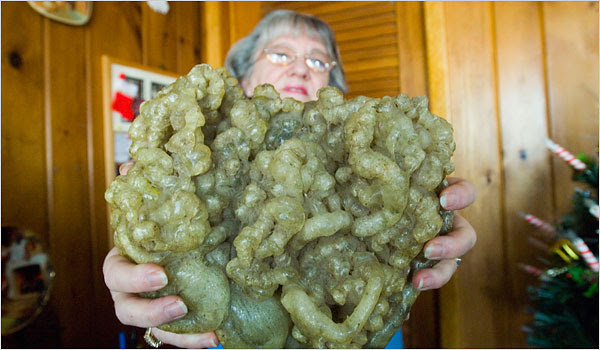 Gotta love the Brits. Last week two gents discovered gold on a local beach in the form of 110 pounds of Sperm Whale vomit, and they decided to keep it.

Turns out this disgusting substance called Ambergris is used in France (where else?) for rare perfumes.

Naturally we thought this was as nasty as it gets, grubbing around on a beach in search of greasy balls of whale vomit...that was until we discovered how much these guys stand to make off the stuff-$500,000 pounds, or in depressed American dollars a whopping $996.973.12!

Sean, from Penrhyndeudraeth (try saying this without loosing a tooth) in North Wales, said the pair were on the beach walking a dog at nearby Criccieth when they made their discovery.

"We just came across this white, like waxy lump. I said to Ian: 'It looks a bit like whale sick. He had never heard of anything like it," he said.

O.K, so maybe they have something there, and with the price of homes here in California hovering around $800,000, do not be surprised if you see one of the Shark Diver crew out on that beach in the near future. Too bad this story didn't hit on April 1st.

Turns out this week there's one place in the USA that has more Hammerheads per square inch than anywhere else...and you can blame Osama bin Laden for the fact you cannot go and see them.

One of the stranger rules of unintended consequences we have seen in a while.

"The discovery of Cape Canaveral's importance as a shark nursery could help shed new light on the global decline of the ocean's top predators. Scientists are desperate to know more about the lifecycles of large sharks such as hammerheads -- one of the most vulnerable species to dying on fishing lines. By identifying crucial nursery grounds, they hope to improve federal management of large coastal sharks."

Young hammerheads and other juvenile sharks got a de facto sanctuary when the Coast Guard closed off the ocean surrounding Kennedy Space Center after the Sept. 11 terrorist attacks.
Posted by Horizon Charters Guadalupe Cage Diving at 5:06 AM No comments: