Shark Fin on Business Insider, With a Steaming Bowl of NY Hate? 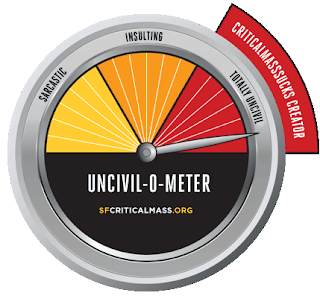 Reporter Matthew Kassel with the Business Insider got on to the shark fin debate in New York City in a unique and eye catching way this week.

He ordered and ate a bowl of shark fin soup.

This is one of the better written articles we have read on the multilayered issues surrounding shark fin bans, conservation efforts, and of course New York, currently in the middle of debates about shark fin bans.

The article is filled with facts, good quality interview subjects, and of course the actual moment that the reporter orders up a bowl of shark fin soup as part of a grander social experiment.

What got us was the extreme level of Asian hate on the comments section of this article. A level of acidic racism directed towards the NY Asian community that went unchecked and unchallenged until we stepped up today to say a few words.

Is this really the shark conservation movement and where the hell is the leadership?


I swear by god i'd rather see every single east asian dead before they kill the last shark. Mark my words, if it comes to this, I'll be on the sharks' side.
-rufus
Posted by Horizon Charters Guadalupe Cage Diving at 7:06 PM 6 comments:

"This 4 metre plus female great white had just bitten Mark's cage and was circling when he turned on his camera .... at 1.09 he see's it approaching from behind his cage. He's been down at 26 metres for over half an hour and is forced to make a decision. Stay on the bottom and run into decompression time or confront it .... Starvation Bay, South Coast Western Australia, October 2011."