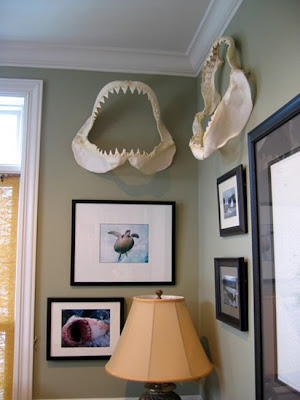 We just knew this was not going to be easy, it never is.

Following the discovery of a complete set of white shark jaws for sale on eBay we dug around a bit more and discovered the following website. Frankly for a shark diving company like ours we had thought these kind of sites were all but gone following regulations.

If this sites claims are true, we stand corrected, but it does not take away from the fact the trade in white shark jaws remains a repugnant practice.

Seems wherever there's a market you'll find a seller:

This entire page is dedicated to genuine GREAT WHITE SHARK TEETH. The teeth have come from a large great white (genuine Carcharodon Carcharius) (estimated at an 18-20 footer) caught before December of 1998; after this time they were declared protected, then endangered, so no great whites have been caught since that time.

PLEASE NOTE: Great white shark teeth & jaws can be shipped only within the .

THAT IS WHY THE PRICES OF THE GREAT WHITE SHARK TEETH ARE MUCH HIGHER THAN ANY OTHER SHARK TEETH IN THE WORLD.

We do not go out and catch sharks for their teeth! Great whites were declared endangered since December 1998 so it is ILLEGAL to catch them now. But they are NOT ILLEGAL TO OWN OR SELL. So what are people supposed to do with the ones that are already in circulation? Hide them? Throw them away? No, those that are in circulation are allowed to be traded, sold, resold, collected, displayed, bragged upon, showed off.

So because there are a limited amount of these specimens in circulation.....the value has only one place to go....UP (just like elephant ivory products). Modern Great White shark teeth are not found while diving or digging. They now only come from existing collections. 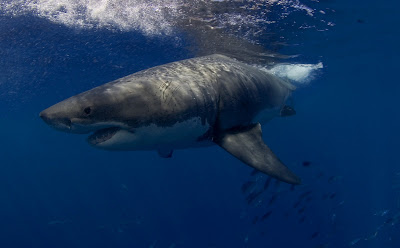 Good news from the crew over at the Nautilus Explorer going to Isla Guadalupe this year. Drop down cage systems for better shark images:

We are excited to offer a very unique experience to our certified scuba dive clients with a shark cage that can submerge to a maximum of 40 feet. Guadalupe Island has fine and excellent diving conditions with beautiful blue water, 100 foot visibility and seas that are usually calm.

However, it can get windy and it seems to us that the white sharks tend to stay a wee bit deeper on windier days. So, we borrowed an idea from Australia and built a submersible 3 person cage that will offer an awesome view unlike any other. Photography opportunities should be wild. Rebreather divers are welcome to bring their rigs which is a first!! Strict safety protocols will be in place.

Submersible cage diving has been done for many years in Australia and we are very fortunate to have one of the leading shark experts in the world, Rodney Fox, joining us this fall to show us how it's done. 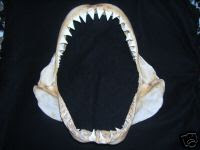 Thanks to the sharp eyes of blog reader "Samir" we were notified this morning of this recent shark travesty on eBay.

This is what you think it is and yes, it is illegal in the USA to sell white shark jaws and teeth. If this item is still up on eBay you can find it here:

The current bidding is $1750 USD but will always go much higher if left to market driven buyers. The last set of jaws we saw on eBay a few years ago was a $5000 prior to our email campaign. If you have a chance today, and you want to do some good, here's the sellers eBay contact info.

Please feel free to contact both the seller and eBay management at the following contacts to inform them of your feelings about this:


"A Big Thanks" from the crew here at Shark Diver
Posted by Horizon Charters Guadalupe Cage Diving at 1:37 PM No comments: