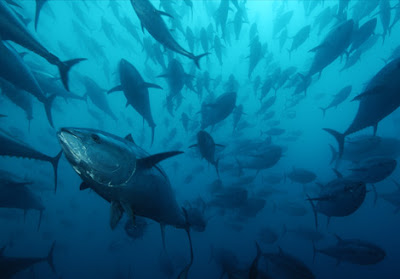 Gulf oil spill by the numbers:

12 - number of days this wellhead has been gushing oil.

70,000 - number of gallons of toxic oil dispersant being used to break up oil slicks each week.

80-90% - declines in Atlantic Bluefin Tuna stocks over the past decade to overfishing.

4-6 - months (April-June) that Atlantic Bluefin Tuna spawn in the Gulf region where the oil slick is currently present.

0-6 the depth (in feet) where spawning eggs and young survive.

Some of the best minds in conservation and fisheries are raising the alarm about Bluefin Tuna in the Gulf right now. Just one species being impacted by what will soon be the world's largest oil spill.

While the major media will focus on oil soaked birds it is important to know that the Gulf is essentially a giant nursery for a wide range of spawning aquatic animals that depend on the top trophic layer of the ocean for life.

The same layer now being contaminated by "oil and dispersant" and toxic soup growing in size every single day.
Posted by Horizon Charters Guadalupe Cage Diving at 6:23 AM No comments: