The media grabbed last months unfortunate shark attack in the Bahamas and chewed on it with a ferocity reserved only for Michael Viks vast Pit Bull Empire. It was, for a time, the shark story that would not go away.

Additionally, anyone during that month with a shark film to flog, pictures to sell, and anti-shark diving websites to promote did the same. The word "Circus" came to mind.

Once again the media is running with this story just in time for the spring dive charter season from the Red Sea to the Caribbean. What makes this story interesting is the reporting balance that is attempted here. This is the first time we have seen a story that even tries to take a look at the nuances involved in this highly charged issue.

The headline's a grabber, but the body has some interesting points both pro and con. It would be nice to see more of this kind of reporting and less of the rest.

In the end it will be up to the Bahamian Government and not the dive operations or even paying divers to decide how much liability they will be willing to accept in the name of cage-less big predator encounters.

Swimming with sharks: is it ever safe?

The death of an Austrian tourist bitten during an organised shark-safari dive off the Bahamas has reignited arguments about the safety of such pursuits.

Markus Groh, a 49-year-old lawyer from Vienna, was one of 10 scuba divers aboard the MV Shear Water, a charter boat operating from West Palm Beach, Florida, which embarked on a shark-safari expedition on February 24.

He was bitten on the left leg by a bull shark and taken by a US Coastguard helicopter to a hospital in Florida, 60 miles away. The Miami-Dade County medical examiner found that he had died from loss of blood.

According to an eyewitness, Groh was diving north of Great Isaac Cay, an uninhabited islet in the Bahamas, where sharks had been lured by plastic crates filled with fish heads and scraps placed near the reef by the Shear Water crew. On these dives large sharks and divers are in close proximity, and the divers do not use a safety cage. The attraction is that photographers get action shots of rarely seen predatory species including tiger sharks, bull sharks and great hammerheads.

Immediately after being bitten, Groh was taken to the surface by a dive guide and given first aid on the dive boat. Air evacuation was carried out within the hour but, in spite of clotting agents being applied to the wound, Groh bled to death.

Jim Abernethy’s Scuba Adventures, which operates the Shear Water vessel, is well known for its shark safaris to the Bahamas from Florida, where shark-feeding was banned in 2001. The Scuba Adventures’ website warns that “shark diving is a potentially dangerous activity”, and that the sharks will be attracted by “chumming the water with fish and fish parts to ensure the best results. Consequently, there will be food in the water at the same time as divers.”

Following the fatality, the Bahamas Diving Association said it had issued a letter discouraging dive operators from open-water diving without a cage with 10 species of potentially dangerous sharks - including tiger sharks, bull sharks and hammerhead sharks. This seems disingenuous given that most of these species have rarely been proven to prey on humans. Cage diving is not the same experience, and is usually only carried out with great white sharks whose behaviour is less predictable.

Shark-feeding is not illegal in the Bahamas and several local dive operators have, for many years, been safely conducting what are commonly known as “shark rodeos”, where dive guides feed sharks. I have taken part in numerous such dives, which are extremely exciting and a valuable opportunity for divers to study sharks at close range with experienced dive leaders.

However, most organised shark dives do not allow ''free chumming’’ where fish parts are scattered from a boat in advance to attract sharks. Some operators use a “chumsickle” a frozen block of fish scraps that thaws slowly underwater allowing very limited amounts of food to be released in front of the sharks. Others distribute bait, which is handled only by a shark wrangler in a protective suit who distributes it intermittently among the sharks a safe distance from the watching divers.

Chumming for sharks has attracted controversy in several parts of the world, including South Africa, where some experts argue that great white sharks are learning to associate the sound of boat engines and shark cages with the presence of food. However, with sharks increasingly endangered, and large specimens of most species becoming rarer, scuba divers are prepared to pay a lot to see them. The British company Divequest charges about £3,000 for a week-long shark expedition on Shear Water. The company aims to “maximise time spent in the water and in front of big sharks, as close as you want...”

American media reports of the attack have questioned the wisdom of divers getting into the water with large sharks, especially bull sharks (Carcharhinus leucas), which are widely regarded as among the most aggressive species. It was a bull shark that bit Erich Ritter, the shark expert, in the Bahamas in 2002, when he was making a documentary about how unlikely sharks were to bite a human.

Nevertheless, most divers would argue that the death of one diver, however sad, is statistically insignificant when set against the number of safe encounters between divers and sharks. The International Shark Attack File at the University of Florida records, on average, fewer than 200 attacks a year worldwide, of which less than five per cent involve divers. By comparison, pet dogs account for almost 1,000 admissions a day to hospitals in the United States alone.

“People should be free to engage in activities that have a perceived risk,” said Simon Rogerson, editor of the British Sub Aqua Club magazine Dive. “If we restrict shark diving, then we would have to argue that deep diving or cave diving should also be forbidden. There are many things that divers do that are more dangerous than diving with big sharks.”

John Bantin, chief correspondent for Diver magazine, is equally reluctant to warn divers off shark encounters. “It’s easy to be wise after an accident,” he said. “Sharks are wild creatures with a degree of unpredictability, just like lions or buffalo. People get killed on safari but we don’t try to ban bushwalking following accidents that occur where professionals are leading tours.”

We continue to find sharks the most fascinating of sea creatures. I, for one, am in awe of them, and will always try to see them underwater. No creature has their grace or pure power and there is an undeniable thrill in meeting one. In their element, they are our superiors - and that is precisely why we are excited to see them.

Thanks to recreational divers, we understand that most sharks choose to avoid humans most of the time. Occasionally, there is a misunderstanding and someone gets bitten - but very rarely preyed upon. Markus Groh was not foolish to be in the water near sharks. With the evidence available, it seems he was just unlucky.

Posted by Horizon Charters Guadalupe Cage Diving at 9:21 AM 6 comments: 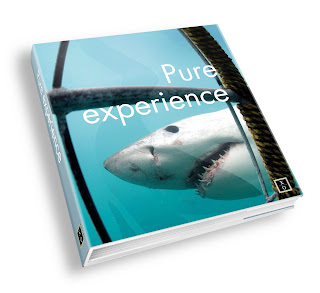 Like you the crew here at Shark Diver probably gets about 50 offers a week from a wide range of companies.

The credit card companies are the worst, when you think that a deforested area the size of Rhode Island gets harvested every year just to present glossy credit offers to you...makes you wonder.

This offer came in today via email (at least they save a tree on the front end) for a fee, this company will feature your companies adventures in book form and mail it to you.

Naturally we hit "delete" but saved the cool image, looks like one of Rodney Foxes images from back in the late 80's-vintage stuff.
Posted by Horizon Charters Guadalupe Cage Diving at 8:58 AM No comments: