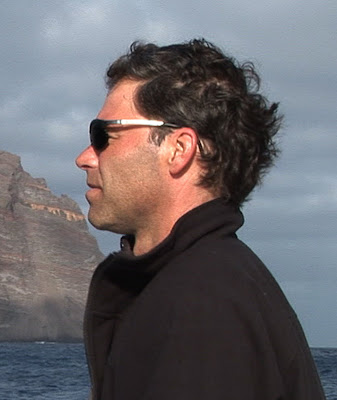 From Steve Blair this week a quick albeit amazing Giant Squid report from the Sea of Cortez:

I wanted to tell you about my dive trip down to Santa Rosalia, Baja last week. I had an interesting trip! As you know I was going down there to dive with the giant Humboldt squid and with our infamous friend Scott Cassell. Scott was finishing up a Discovery Channel film shoot when I arrived and we had 3 days of diving to look forward to.

The idea was to get into the water once at dusk and then again after dark to observe and film the squid’s natural feeding behaviors at night. Because the squid can be pretty dangerous we were wearing full chain mail suits and helmets for protection against bites and the ring teeth in their 1200 suction cups and eight arms.

Here’s the fun part – we were diving at night in blue water with only 10 foot visibility hanging on a steel cable 40-50 feet deep under the panga and suspended over the 3000 foot deep abyss below. At night with the limited visibility you looked down below your fins into the inky black that only monsters come out of! We had no lights except for two small LED lights on a cable suspended 15 below the boat.

To bring the squid in close (and that’s not difficult) we had the fisherman on the boat cut up chunks of squid they were catching and throw them overboard. It was eerie to watch the white chunks of flesh flutter down all around us and just before you lose sight of them in the dark around you “something” would quickly appear and the chunk of flesh would be gone in a blur of arms.

The squid are very fast and in the limited visibility they move in and out of sight really quickly. These were some pretty large ones at about 6 feet total length. I was watching one attack Scott in the head and seeing others move around near him when one hit me in the side of the head as well. When they attack they hit with force and the arms grab and hold while the beak rips into you. Luckily I was wearing a helmet and this one didn’t try to bite me.

In the dark with hundreds of squid darting all around eating the chum raining down it can get pretty intimidating – like walking through a bar where everyone is throwing punches at you or is about to! Wild stuff to say the least. And I thought cage diving with great whites was cool.

Wanna go diving with us? 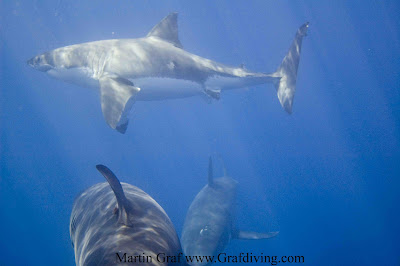 "Shark Soup" was the description from Captain Greg this morning as he read off the current list of white shark "regulars" who have been making the rounds behind the MV Horizon and thrilled divers this week:

"We're actually getting four and five sharks in the same frame at the same time".

Ahhh, you just gotta love white shark diving in August, it's hard to beat all the shark traffic at this time of year. For those of you joining us this month-welcome to Isla Guadalupe.
Posted by Horizon Charters Guadalupe Cage Diving at 10:58 AM 1 comment: 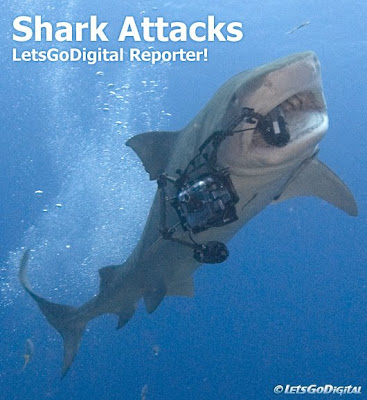 Steve sent this very well seasoned look at the state of commercial shark diving by Ruth Emblin. It touches on some points we have been wanting to address for several weeks, about the nature of the business of shark diving.

The media simply loves to latch onto shark attacks and turn them into sensationalist news reports that spread like wildfire all over the world. Don’t misunderstand me, my heart goes out to the victims of shark attacks and their families. My heart also goes out to the victims of other accidents and violence. Any such accident or loss of life is terrible. What I object to is the automatic response to shark attacks that the shark is so dangerous to us humans that we need to wipe out the species to stay safe.

I ask you - who was there first? Certainly not us, the sharks have us beat by several hundreds of millions of years. Yet we puny primates have been able to wipe out close to 90 % of the world’s sharks in the short time we’ve been in the picture.

A recent fatal shark attack in the Bahamas has brought up concerns whether the Bahamian government should completely stop “shark tourism”. Those of you who have dived in the Bahamas know that shark diving is an big draw. I do not think shark diving should be stopped in its tracks, however, this may be an opportunity to change some of the policies for the benefit of both sharks and man. I have had several shark encounters while diving and am fascinated by their grace and power. The more people get the chance to experience these amazing animals, the better, as long as it is under controlled circumstances which do not endanger the sharks and their environment.

I am against “mass shark tourism”, but support the controlled exposure. However, shark diving operators have to ensure their practices are not encouraging unnatural behavior among the sharks, e.g. by getting the sharks too used to feedings. Having said that, I wholeheartedly support those dive operators who are dedicated to educating divers (and non-divers) about sharks and their environment, and do it without major impact on the sharks’ behavior. We can never forget that we are just visitors in their environment and should not attempt to modify their behavior. Shark feedings, even under controlled circumstances, are risky not only because the elicit an instinctive response from the sharks, but also alter the sharks’ natural behavior. Observation alone has never hurt anyone.

There is no doubt that the recent reports of shark attacks will have a negative impact on shark conservation. The “uninitiated” will only see the danger, not the underlying reasons these tragedies happened. I was very saddened to hear about the recent tragic accidents and my condolences go out to the families of the victims, yet as heartrending as these losses are, we need to look at the bigger picture, and the fact that the media buzz around these events could invalidate all our conservation efforts very quickly. Sharks may not evoke a warm and fuzzy feeling like panda bears or seals, but that doesn’t mean they don’t deserve our protection. No, sharks aren’t fuzzy and huggable (well, if you are Rob Stewart, then maybe they are for you), but they have ruled the oceans for hundreds of millions of years and we “upstart” primates do not have the right to wipe them out just because they’ve clashed with us on occasion, and because of that have been portrayed as the stuff of nightmares and Hollywood shockers. The public needs to realize that sharks are the top predator in their territory, and necessary to balance their respective ecosystem.

If we continue to wipe out the top predator, the balance will shift dramatically and subsequently endanger our own survival. I really wish there was a way to “endear” sharks a little more to get away from the fierce predator or even manhunter image. They really are beautiful, graceful animals, completely at ease in their environment. No, they aren’t really fuzzy and huggable, but we can learn to love them. The shark needs an “image make over”, and I hope that many like-minded individuals will join us in finding a way to accomplish this. Just look at Rodney Fox - he was grievously hurt by a Great White and almost died - yet he has become the biggest shark advocate out there, because he understands the reason why he was attacked. We need more people willing to ignore the negative, sensationalist press and understand the importance of sharks within the ecosystem. Will sharks ever become as popular as e.g. bears of all kinds? I don’t know, but we sure can try to change their image.

Think about it - millions of children love their teddy bears… yet a ”fuzzy” Grizzly recently killed its trainer. Are we now going to tell our kids that bears are monsters and take their toys away because of this? I very much doubt it.

Our world has seen too many negative changes since we humans began our industrial evolution. Wildlife in general needs our attention now, be it land or ocean animals. We have to do it one step at a time. Sharks have been rather neglected because of their negative image (which is unfortunately a curse all endangered predators are under), and we need to step up our education efforts in order to at least make the next generation aware of what is at stake.

We have no idea who's the fertile mind behind The Chum Slick Blog but it's hard to not spray coffee all over the place after reading a post or two. Case in point, we were going to take a run at the following shark story posted in the Sun this week-but after reading the C.S take on it, and spraying coffee all around...why improve on perfection?

British tabloids love to pimp their Shark hysteria this time of year. Witness last year's Cornwall Great White hoax. This year, The Sun is pimping McJaws, a supposed Great White spotted by submarine camera off an oil rig in the the Scottish North Sea--120 miles off Aberdeen.

"There’s no reason why it couldn’t have travelled here from the coast of the US. There’s plenty of food in the North Sea and the temperatures are fine for them. Sharks are attracted to rigs because the water near the structure is warmer. If there was going to be a Great White in the North Sea, it would be likely to be found near a rig."

The funny thing about this comment is that Great Whites favor colder water, since they are basically warm-blooded Sharks. But forget about all of that, the picture clearly shows a Porbeagle Shark. While Porbeagles are becoming increasingly endangered because of overfishing, they are not unheard of in the North Sea. Here is photographic proof.

Oh, and here is the important part. There has never been a recorded attack of a Porbeagle on a human being. So the Scots better get back to fearing Nessie. If they want Great Whites, they can go down to South Africa.

Posted by Horizon Charters Guadalupe Cage Diving at 9:18 AM 2 comments: