When we arrived back from the Bahamas and ten days of filming sharks we had to "wade through" an email box filled with white shark trip reports and emails like this one from Michelle M.

Michelle joined us this fall all the way from Trinidad and was one of the most enthusiastic shark people I had the pleasure of speaking with last year on the phone.

Congratulations to Michelle our latest Shark Diver and her face time with Shredder, Isla Guadalupe's most famous resident:
Hi Patric,

When I booked my trip with Shark Diver last August, I had a whole year to read all the blogs and trip reports and whatever else I could find about the sharks at Guadalupe.  I thought I had an idea of what it would be like and what to expect, but having finally made it out there in September, I can honestly say that the experience was so much better than I could have possibly imagined!
Once you've been out there, you know you're going to go back!


The whole trip was amazing, but I think the highlight for me was definitely the second day of diving.  Anyone heading out to Guadalupe, would have heard about Shredder.  Everybody knows how he got his name.  Having him show up on day two was just awesome!

It's almost as though he knows we came out there to see him and he does not disappoint.  He takes his time cruising past the cages and I was just mesmerized by him. Here is this massive 16 foot great white just a few feet away from the cage, and he is looking at me, straight in the eye! The first time he makes eye contact it's like wow, really?? But then he does it again and again, and it's unbelievable!

So day  two had gotten off to a great start, but it got even better, when a few hours later, we had a juvenile get a little frisky with our cage. Seeing a great white that close to the cage, mouth open, ready to have a go, was priceless!  I could not have asked for more! Of course Martin and the rest of the guys are on deck, keeping an eye on the sharks and he had to give it a little nudge away from the cage but what a fantastic experience!

I think we had a total of 8 different sharks over the 3 days, I had some really great people in the cages with me, but the Horizon crew deserve a special mention. They are exceptional at what they do!

Every single crew member went out of their way to make me feel at home and comfortable and they made sure I enjoyed my vacation. They really looked after me for the entire time I was on board! I wouldn't want to go out there with anyone else!

So thanks again for everything, Shark Diver and the Horizon made this my best vacation ever.  I may have been the first Trini to make it out to Guadalupe, but I am pretty sure I won't be the last! 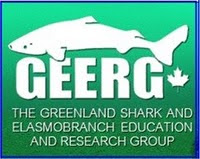 GEERG is being considered by the Aviva Community Fund in order to launch the world's first webcam shark monitoring system in the St. Lawrence Estuary (Quebec, Canada).

If their bid is successful, the GEERG HD video feed and webcam will be online and accessible to everyone 24/7 on the GEERG website.

In order to become a finalist, their project requires as many votes as possible. We have been big fans of GEERG for the past 7 years and the work they do in Canada.

This is one research team worthy of your support, and that includes you, the 2.38pm latte drinker who dips into this blog from time to time to "get your shark on."

A vote for the GEERG project is a vote for shark conservation. Please register and VOTE ONCE A DAY for the duration of the contest starting Monday, October 3 and please ask all of your friends and shark enthusiasts to do the same. Help GEERG protect sharks.

Start the clicking now.
Posted by Horizon Charters Guadalupe Cage Diving at 10:11 AM