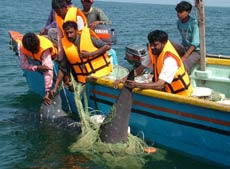 We have been following the efforts of a small group in India in tandem with a few well known NGO's who are reversing the wholesale slaughter of whale sharks in their region. Replacing the "one time take" instead with new whale shark tourism initiatives.

In our world whale sharks represent "instant tourism". In places where whale sharks aggregate divers throng from all over the planet to interact with these gentle giants. In many cases a daily rate of $200USD per diver is not uncommon. For a place like India $200USD represents a yearly wage for many impoverished fishermen rapidly providing the incentive for further protection of this species and others.

Existing whale shark dive protocols and ease of interaction with these animals allows operations to focus on the marketing and sales aspect of bringing whale sharks to divers. For India this program could be ramped up in a short period of time.

This organic and quite remarkable effort has paid off. Now, more often than not, whale sharks accidentally caught in nets are released with the help of a local team from "Save Whale Shark".

In September last year, fisherman Amrutlal Chauhan and helpers spread their nets in the sea near the Saurashtra coast, hoping to catch some fish. But what got trapped in the net took them by surprise. It was a 20-ft whale shark. A timely call was made to the local ‘Save Whale Shark’ campaign activist Dinesh Goswami who along with personnel of the forest and fisheries departments came to the spot to cut the nets open and set the giant fish free. 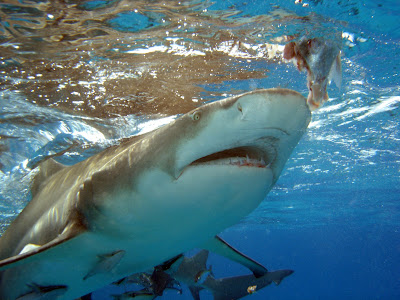 At DEMA this year we were discussing the state of shark tourism with a number of tourism representatives from all over the world.

As we have long pointed out shark tourism enables local populations to sustainably manage sharks. The value of shark tourism in places like the Maldives is US$2.3 million a year-an estimated at 100 times more than the export value of that islands shark meat.

This is an industry drumbeat that's been gaining acceptance over the years and is now being adopted by forward thinking NGO's.

Unfortunately in many places this paradigm has also become a race between local fishermen who harvest sharks, for both fins and quick profits, and the newly developed and existing shark tourism operators in the region.

No where is this more aptly highlighted then recently in Malaysia and Mabul Island. This week State Tourism, Culture and Environment Minister Datuk Masidi Manjun took the extraordinary step of calling for an investigation of shark fishing activities in the region. This is to applauded and kudos to the minister for this stance.

If Mabul Island and surrounding region is to retain it's sharks, local efforts in tandem with government are the key:

"Nature lovers and the global conservation community are fast becoming very influential lobbyists whose action could hurt the State's tourism industry in the long run if they decide a boycott of Sabah to protest against activities perceived to be cruel to whales and sharks," minister quote.