The Wacky Gods of Mormonism and Mitt Romney

I am also vaguely aware that Mitt Romney is a Mormon, slapping that religious construct in with the Amish, nice folks who believe in an all knowing deity with a white beard and a fluffy cloud.

That was until I saw the following video, made by Mormons, for Mormons, to explain their religion.

Far be it for me to say that folks cannot believe what they want in their own homes, or within their own church. But as we all know religion tends to shape folks perception of the wider world in which we live, as in George Bush's famous quotes "God would tell me, 'George go and fight these terrorists in Afghanistan'. And I did. And then God would tell me 'George, go and end the tyranny in Iraq'. And I did."

Mitt Romney's take on the wider world? After watching this video, you don't even want to know:

Posted by Horizon Charters Guadalupe Cage Diving at 10:31 AM No comments:

Labels: church, mitt romney, mormon, president, wtf with a side of wtf

Travel Channel and Sharks in Fiji 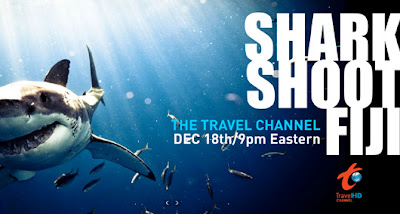 Rumors of this show have been circulating the community for the past three years with an initial show treatment that was passed around for review.

Today this unique concept is a reality and we have to say, we like the premise:


A new show on the Travel Channel is airing this Sunday (9 PM EST/6 PM PST) and it has a novel premise: send a team of high-end Hollywood photographers to a series of remote locations and recreate a professional photography studio underwater. To this end, the team has pioneered new camera rigs, shooting platforms and lighting equipment that supplies the kind of high-voltage illumination normally reserved for the cover of high-fashion magazines like Vanity Fair.

In their first shoot in Fiji, Mike Muller and his team descend 70 feet where they find and photograph over 8 varieties of sharks. One of their goals is to finally put a face on these elusive creatures who in many regions are struggling to survive with increasing pressures from shark-fin hunters, overfishing and changes in ocean temperature.

Kudos to Mike Muller and good luck with the show.
Posted by Horizon Charters Guadalupe Cage Diving at 8:30 AM 1 comment: