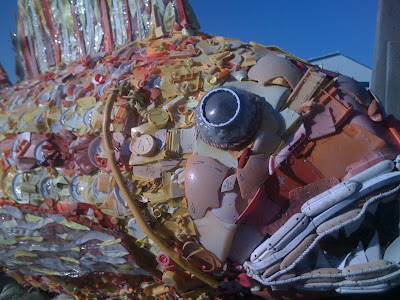 At the intersection of of art and ocean conservation one name stands out - Angela Pozzi.

This unique piece is taken from plastic left overs, things that washed up onshore, transforming man made garbage into art forms that educate and inspire future generations to change.

Her garbage fish has received rave reviews internationally and she is hoping that artists will imitate her unique vision around the planet.

Not a bad idea and not just limited to second hand oceanic garbage.

Imagine a full scale white shark model made from sharks fin. The dollar value of that single piece of art would have quite an impact and for the public a profound visual understanding of sheer waste that is the shark fin trade.

Kudos to Angela for her two ton masterpiece of garbage art. 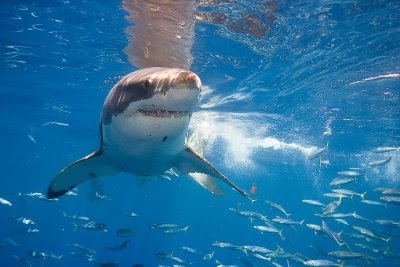 There's a space on the Internet for "guys only" offering up the best gadgets, dining, hotels, and adventures from around the planet.

It's called Thrillist and last week SharkDiver was front and center talking shark diving to Thrillist members from Miami to San Diego.

Shark Week's about as close as most guys ever get to the beasts, except for those few daredevil divers who ironically can't watch Shark Week, because using a remote requires arms. Just kidding, they're more afraid of you than you are of them!

For proof, check out Shark Diver.

Ready to sea-whisk you 20 hours away to an island 150 miles off the coast of Baja for "guaranteed" Great White swims, Divers is run by an adventure seeking dude who's braved everything from Australian crocodiles, to Peruvian landslides, to Kiwi cyclones, which unlike sharks, don't leave you alone when you poke them in the eye. Anchoring in the 100+ ft visibility-waters near volcanic Isla Guadalupe (the most active white shark spot in the world after that island off South Africa, and...somewhere else), divers'll descend in 4-5 person, 50sqft cages which are air-supplied via surface hoses (eliminating the need for bulky tanks), and've been newly revamped by removing multiple bars for greater visibility, and compacted to "prevent drag", the biggest one of which would be if they improperly removed those bars.

If you prefer to be food, they've also just built a non-caged “cinema platform” for more advanced divers/photographers/death-wishers, which's lowered 40ft into the deep blue sea with absolutely no protection for the diver...though it's not like you'd be able to hold on to it for long anyway.
Posted by Horizon Charters Guadalupe Cage Diving at 8:16 AM No comments: