Shark: In Peril in the Sea 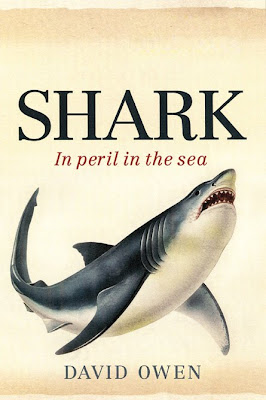 It’s a sure sign of evolution: Sharks, dominant predators on Earth for millions of years, are now threatened by humans. In the past few decades shark populations have plummeted and the very traits that long helped prevent the beasts from overpopulating the seas — low birthrates, slow growth and a late arrival at sexual maturity — hinder their recovery from the depredations of overfishing, pollution and habitat destruction.

Owen, a Tasmanian author who has also demystified that island’s famous devil, takes a fascinating look at the biology of sharks, from the smallest (the 19-centimeter-long dwarf lanternshark) to the whale shark, the world’s largest fish. He also explores the complex relationship between man and shark. Sure, we eat each other, but the body count is horribly lopsided. While sharks attack only a few dozen people each year, the annual shark catch routinely tips the scale in the hundreds of thousands of tons.

In large part due to the violent nature of their attacks — which often come literally out of the blue — sharks have long inspired fear and fascination. The 1975 blockbuster Jaws tapped into that primal fear but also demonized great white sharks and, via guilt by association, many other species. Yet, Owen notes, much good came from the film. It inspired scientific interest in sharks and their relatives and spawned shark conservation efforts worldwide. Shark is a captivating portrait of creatures that have too long been unfairly maligned as malevolent, mindless eating machines.

Posted by Horizon Charters Guadalupe Cage Diving at 10:30 AM No comments: