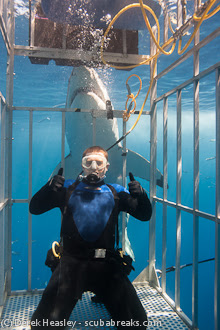 We're experiencing record bookings interest again this year and selling our the prime season dates from Aug-October as fast as they go up.

It could be that a decade later Guadalupe is now understood as the premier white shark encounter site on the planet.

Or it could be the rave reports we get back from our divers every single season thanks in most part to the amazing US dive crew and vessel the M/V Horizon:

James Woodhead from the UK

Or it could just be that folks want to go see a shark and scratch that Bucket List, either way we're here to help with the announcement of Aug 12-16 now open for business.

Early August dates feature the most males up in the north bay. These are scrappy animals. Bruce, Shredder, Mau, all vie these waters for dominance. Think of it like an Elk Rutting Season when the males gather to establish who's the biggest and baddest animal on site, because in a few short week the breeding aged females arrive in October looking for a "migration buddy."

After a decade of operations here we are still in awe of these animals, still like the early days out there, we're here to learn, here to admire and here to explore.