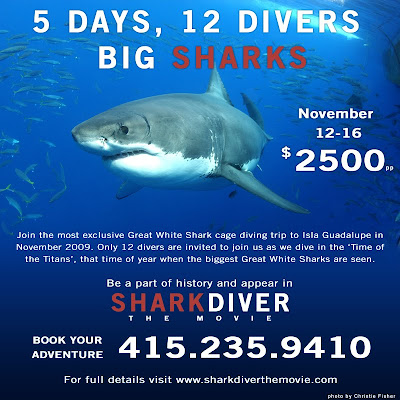 For the next 5 days we'll be at Isla Guadalupe cage diving with the largest aggregation of white sharks on the planet.

November is your chance to dive with the largest sharks of the season. We call this "The Time of the Titans."

For limited time we'll be offering a few spaces on a new film project shooting at the island.

If you have ever wanted to join a professional film crew and see how shark productions are made, this is your chance.

Special pricing, our own private shark boat, and the biggest white sharks of the entire shark season.

Labels: isla guadalupe, sharkdiverthemovie.com, The Time of the Titans

The number one rule for regional tourism is "never take tourism options off the table." This rule looks into the future of tourism destinations and changing public demand. What is not popular today may well be tomorrows latest fashion.

Case in point Florida's disastrous decision to ban commercial shark diving in 2001. At the time anti-shark opponents hailed the decision as a "win."

The number one rule came into play shortly after that fateful decision.

As short sighted Florida politicians, quasi eco groups and media folks congratulated themselves, a smaller celebration in the Bahamas quickly turned into a $70 million dollar ongoing tourism boon for the islands.

Today the Bahamas has the distinction of being the "Shark capitol of the planet," enjoying thousands of shark tourists who flock to these islands to interact with sharks safely, and sustainably. As a side benefit, since 2001, over 300 shark centric film and television productions have been shot here highlighting the Bahamas to millions of additional tourism seekers.

If there's anything to be learned from the Maui decision this week, savvy regional politicians should take heed. Tourists like destination options, and when presented with bans on any tourism option they will flock to the place where they can find that option. These are basic tourism facts, stripped away from rabid anti-shark diving groups who equate sharks with fear, first and foremost.

Florida is one $70 million dollar lost example of that basic tourism principal and now Oahu, with it's thriving commercial shark operations is poised to enjoy the flood of tourism seekers that Maui is turning away.

Is anyone paying attention to the tourism numbers in Maui? Clearly not. On Oahu hopefully politicians can see the opportunity that one short sighted island has presented to them.

Florida politicians showed us in 2001, by lack of vision and poor planning, how ignoring "the number one rule," can hurt the broader economy at large.
Posted by Horizon Charters Guadalupe Cage Diving at 8:24 AM