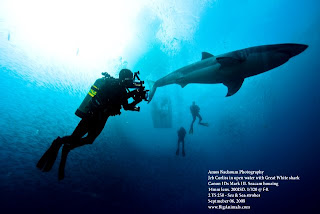 A few months ago we blogged about a series of images and a video making the rounds to "industry insiders".

What was once thought to be a commercial shark diving non starter was attempted by two industry professionals Jeb Corliss and Amos Nachoum this season at Isla Guadalupe. Taking multiple divers "cageless" into the white sharks world. The images they came back with are simply stunning.

What does this mean for an industry already running headlong towards closer and closer commercial interactions with macro sharks?

As we told Amos at the time "We'll defend your right to take these images, but this is not sustainable on a commercial level". That's it. Ironically not three days prior to this shoot a seal was caught on tape being destroyed by a white shark at the island.

Expect to see more attempts like these as time moves forward. For professionals this is a great site to interact with these animals, for the rest of the planet? The cages will do just fine.
Posted by Horizon Charters Guadalupe Cage Diving at 4:41 PM 1 comment: 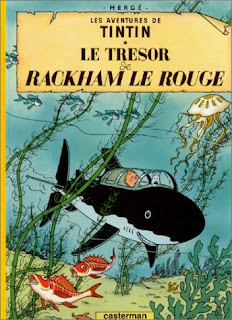 From the Mont Bay A.Q Sea Notes Blog and Ken Paterson, a blog to keep your eye on:

Several years before his death, Peter Benchley said that he couldn't write Jaws given what he'd learned about shark behavior and the threats sharks face around the world.

More confirmation about those threats arrived this week, when the International Union for the Conservation of Nature (IUCN) reported its assessment of sharks & their kin in the northeast Atlantic. The conclusion: 26 percent are threatened with extinction, and another 20 percent are in the near-threatened category.

The total number of threatened species may well be underestimated as there was insufficient information to assess over a quarter of the species.

The most threatened include heavily fished, large sharks and rays, like porbeagle sharks and common skates, as well as commercially valuable deepwater sharks and spiny dogfish. The culprit remains the same: overfishing of species that mature late in life and produce relatively few young.

European agencies that regulate shark fishing have several chances to make a difference in the weeks to come, when they set fishing quotas and consider a European Community Plan of Action for sharks and related species. The good news is that the plan on the table for action in December would ban fishing for the most endangered sharks.

Never before have European countries had more reason or opportunity to safeguard the beleaguered shark and ray species of the Northeast Atlantic," said Sonja Fordham, deputy chair of the IUCN's Shark Specialist Group and policy director for The Shark Alliance.

"Country officials should heed the dire warnings of this report and act to protect threatened sharks and rays at national, regional and international levels. Such action is immediately possible and absolutely necessary to change the current course toward extinction of these remarkable ocean animals."

As individuals, we can make our voices heard. And we can shift our seafood-buying dollars to fisheries that don't decimate ocean wildlife. That's the principle behind our Seafood Watch program.

Can we make a difference? Yes, we can.
Posted by Horizon Charters Guadalupe Cage Diving at 10:09 AM No comments:

Research "Out of the Box"

The fine folks over at Mexico's CICIMAR have come up with a completely novel way of sampling a Sperm Whales breath, it's called "out of the box research". It should also be noted:

2. A whales breath can and will drop a Rhino from 60 feet-so this is a novel approach

Gases and mucus blown out are collected in sterile Petri dishes attached to the 3.5 feet-long helicopter which are then examined to discover the health of the animal whether it is carrying any disease.

Posted by Horizon Charters Guadalupe Cage Diving at 9:48 AM No comments: 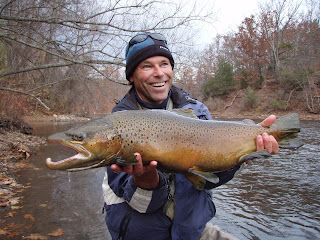 A few weeks ago we got a call from Steve Blair. He was going to upstate New York to fly fish some "Monster Browns" on a river ominously called "Ifwetoldyawehavetokillya".

Steve's a personal favorite of ours here at Underwater Thrills and we have been with him on a quite a few fish related adventures over the years. Here's Steve's email to us this morning:

I would like to announce the arrival of my new "baby". He was delivered on a small river in upstate New York at a chunky 13lbs 8oz and 29 inches long.

Father is doing fine.He did have a few other siblings the same day in the 8-11lb class.

Sent gifts of egg patterns and large rubberlegs (rust and brown) if you would like.

Cheers,
Steve
Posted by Horizon Charters Guadalupe Cage Diving at 9:18 AM No comments:

Reading like a "who's who" of shark conservation the Shark Alliance is the clearing house for up to date shark information and conservation efforts worldwide.

We have been watching (and pulling information) from this site for a few years now and it continues to just get better and better. If you have some time today and you really want to get informed about the plight of sharks globally spend some time here. From WildAid to Ocean Conservancy many of the front line NGO's are featured here.

Make no bones about it sharks are on the agenda.
Posted by Horizon Charters Guadalupe Cage Diving at 7:58 AM 1 comment: 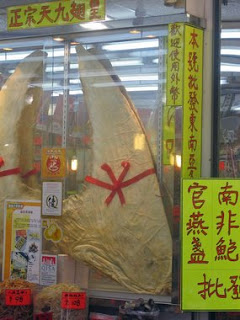 Exciting news this morning from Protect The Sharks Foundation who have been quietly producing some great pro shark PSA's and documentaries. From their press release this week:

The documentary “GIMME A HUG” of the Dutch Protect The Sharks Foundation has won the Palm De Bronze on the 35th Film Festival Mondial De L’image Sous-Marine in the category Film B (independant filmmaker).

This Film Festival is one of the biggest and oldest in the world.This documentary shows one of the most mysterious phenomena in the animal world; TONIC IMMOBILITY. Amazing animals, showing a totally different behaviour then most people would expect.

Filmmaker and producer Geert Droppers is the first Dutchman who won a PALME in Antibes.

Editors Note: It would be nice to see this work on You Tube and the "Big Five" for public consumption. While this is great PSA work, change comes from a wider audience. Organically, these distribution points are a must for any effective shark campaign. Well done Geert!

Posted by Horizon Charters Guadalupe Cage Diving at 7:45 AM No comments: