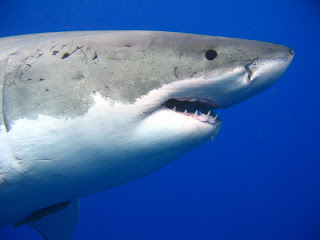 There's only a few places in the world where divers-who are crazy-can get face to face with Great White sharks with the added safety of a cage. For many in the scuba world and beyond these critters are the pinnacle underwater thrill, a close encounter with the "Man in the Grey Suit". You may want to even consider the "Grand-Tour", a visit to each shark site in under one year. For many shark divers this remains the Holy Grail of shark diving.

Be sure to save up in advance as the total cost with flights, hotels, tips, and a few beers for the fearless shark gals in South Africa will set you back about $30,000. If you put it all on Visa they may even stick you in a commercial..Priceless!

provide an ideal habitat for great white sharks. Great whites like rocky outcrops and volcanic islands because the shear drop-offs around the edges of the islands into cool, deep water provides the sharks with the temperature and depth that they need, while the seals and other animals that live on the islands provide an easily accessible food source. sit on a submarine shelf south east of Port Lincoln, and provide an ideal habitat for these ambush predators. This small group of rocky islands, composed of grey granite and coastal loam, supports a large colony of seals as well as a colony of endangered Australian sea lions. Underwater footage for the movie "Jaws" was shot here because the waters around these islands are a natural feeding area for great whites. They have become one of the single best great white dive destinations in the world.

Who Dives There: Rodney Fox

Six miles off of Gansbaai, off the Western Cape of South Africa, lies Dyer Island. This is the original white shark destination and the granddaddy of them all. These low, rocky islands serve as a breeding ground for a wide variety of seabirds, while it's neighbour, a rocky outcrop called Geyser Islet, serves as a home for a large resident seal population. Put those two together and what you have is a prime time wildlife buffet for the great white sharks. White sharks, especially juveniles but also a few adults, are seen on a regular basis in the channel between the two islands where they feed on a variety of seals, often leaping completely out of the water "Air Jaws" style. This natural feeding ground is the main reason that many divers consider to be the one of the world's top shark diving destinations. With it's unique combination of wreck, reef, tropical and sub-tropical diving, this prime natural hunting ground for great whites, has earned South Africa a reputation as "the shark diving capital of the world"

Who Dives There: Apex Predators

is an oceanic, volcanic island about 190 miles offshore of Baja , 210 miles south of . The island has a sheer rock wall extending hundreds of feet up into the air, as well as hundreds of feet into the ocean. Great whites like rocky outcrops and volcanic islands because the shear drop-offs around the edges of the islands into cool, deep water provides the sharks with the temperature and depth that they need, while the seals and other animals that live on the islands provide an easily accessible food source. The volcanic islands are the only known reproductive zone for the Guadalupe fur seal in the world, and are important reproductive zones for a number of other marine animals as well. Recently discovered in 2001 by "Doc" Anes from San Diego Shark Diving- the islands large population of pinnipeds makes it one of the world's top places for great white shark sightings bar none.

Who Dives There: Shark Diver

New Zealand has Some 'Splainin to Do!

This is the headline from New Zealand this week. Sadly, where the rest of the planet is just beginning to understand how bad shark fining is, the good sheep farmers in New Zealand have a "Quota System" for shark fining. Then they become surprised when this happens:

Sharks are being caught in the Nelson region and illegally thrown back alive with their fins removed.

Department of Conservation Abel Tasman ranger Stu Houston said he came across a fishing boat in park waters on Tuesday, which had caught about 29 1m sand sharks and cut off their fins, throwing the mutilated sharks over the side. Some of the sharks were still alive.

"It's such a waste," Mr Houston said. "I've been a ranger down here for 14 years; that's one of the worst things I've seen, to be honest." It is legal to catch sharks for their fins in New Zealand, although under the Animal Welfare Act the sharks must be dead when thrown back.

Sharks in New Zealand are caught under the quota system, and mainly sold to Asia. Landing only the fin gives fishermen room to store more valuable fish. Mr Houston said if people knew the practice was legal they would be appalled. "Is that what we do in New Zealand?"

He said he approached the fishermen, who were on a boat from the Nelson region. The boat was fishing between Adele Island and the mainland, and kayakers and water taxis had seen the dead and dying sharks. DOC would not be taking any action as it was a Fisheries Ministry issue, Mr Houston said.

French Pass resident and charter boat operator Danny Boulton said he had written to Fisheries Minister Jim Anderton about the issue as he was so concerned. Shark finning happened regularly throughout the Sounds, he said. Mr Boulton said he had a BBC cameraman on his boat one day who was appalled to see the practice.

The cameraman had worked around the world and said many Third World countries didn't fish that way. It was a waste, Mr Boulton said, and he was concerned fishing was depleting the species. "These sharks, I see them on the reefs, they are really beautiful to see."

Ministry of Fisheries Nelson inshore fisheries manager Scott Williamson said a Richmond company processed shark fins. The value of the fins depended on the species, and some sharks were reasonably lucrative. He was not aware of the Abel Tasman incident, but would be looking into it, he said.

The ministry's main responsibility was to ensure the sustainability of sharks and it had released a consultation paper on shark management and conservation. Submissions on the paper close on February 1. For more information visit www.fish.govt.nz.
Posted by Horizon Charters Guadalupe Cage Diving at 8:56 AM 1 comment: