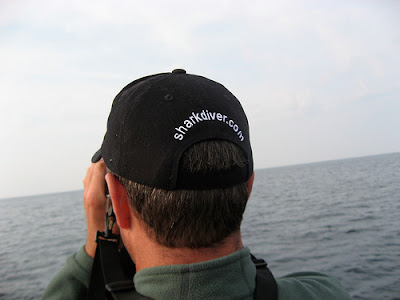 Since 2002 Shark Diver has sold, donated, or just plain given away over 3000 baseball caps.

Featuring our homemade logo on the front "Sharky" and our brand on the back-we're told people hold on to these things like treasured mementos.

Now, 3000 baseball caps dropped into the vast pool of the dive industry is not a lot, so we get a kick out of seeing one on a random Flickr page about someone's Cape Cod whale watching trip in 2006.

We have no idea who this is, but one thing is for sure, they sure get attention wherever they go!
Posted by Horizon Charters Guadalupe Cage Diving at 12:19 PM No comments:

It's strange, the world of media. Even stranger still when an east coast shark story uses this image to make a point.

A little about the image.

Amory Ross joined the crew from Shark Diver last season at Isla Guadalupe to get up close with a few Great Whites.We delivered the sharks, and he took the following image featured this week in the local Martha's Vinyard Times:

Menemsha charter captain Scott McDowell made his first trip of the season Sunday. Scott was at the helm of his new boat, a 35-foot Duffy he named the Lauren C in honor of his daughter.

A memorable line from "Jaws" came to my mind after I received a telephone call Tuesday from Scott. I remembered the part in the movie when the police chief played by Roy Scheider gets his first glimpse of the shark. He turns to Quint and says, "You're gonna need a bigger boat."

Scott said he was between Dogfishbar and Gay Head when a large shark came out of the water about 50 yards in front of his boat. "It was a large animal," said Scott, "surprisingly fat."

Scott speculated the shark has been feeding on striped bass. As far as I know no fly fishermen have been reported missing from Lobsterville Beach, so it is a fair guess.

Scott is a very experienced fisherman and charter captain. He said the fish came completely out of the water and twisted. He said he has seen three great whites in his life. "I have no doubt of what it was," he said. "It was quite astounding."

His customers were equally impressed. Scott said one of the guys said it was "just like TV." I wonder what he would have said if it came up and chomped on the stern.

This is not the first or the only sighting. About a month ago, Coop told me he and his son Danny were fishing for mackerel off Gay Head. Coop said they saw a fish breach and were sure it was a great white.