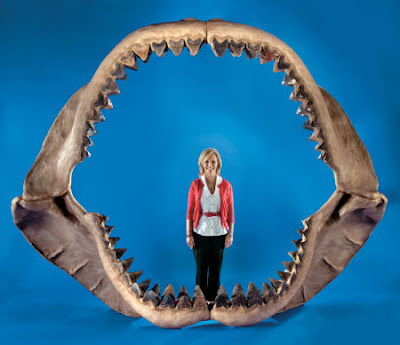 June 2011 the "World's Largest Sharks Jaw" will go up for bid in Dallas at the Heritage Auction Galleries.

The ferocious Megalodon was the largest predaceous shark ever to have swum the oceans of our planet; completely dominating the marine food chain for almost twenty million years. That it could reach the length of two city buses is immediately apparent from this tremendous, astonishing jaw, containing 182 first-class fossil teeth, each with superb enamel coverage, coloring, serrations, and measuring up to 7 5/8 inches along the diagonal, amongst the largest Megalodon teeth ever discovered.

Whilst the teeth of the Megalodon have been found on continents across the world, the finest examples are found along the coastal plains of the Mid-Atlantic States. The majority of the specimens here were personally collected by the late Vito Bertucci in the rivers of South Carolina; esteemed for his dedication and success in seeking out the finest Meg teeth. It took him over sixteen years to recover enough specimens of the appropriate size and shape to complete this collection, the largest jaw set in the world, measuring 11 feet across and 8¾ feet high. Positioned with scrupulous scientific accuracy in a pair of jaws modeled in resin and scaled up from a Great White jaw set, the teeth are accurately arrayed in four rows; each row at a different angle for maximum efficiency in rending the flesh of the great fish's victims. The jaws contain four teeth that each measure over 7 inches along the diagonal, although this is not immediately obvious because part of the roots are embedded in the jaw.

The first description of Megalodon teeth occurs during the Renaissance in Europe, where their distinctive triangular shape led to their being identified as the tongues of dragons. In 1667, however, Danish naturalist Nicolaus Steno recognized them as shark's teeth, and published a description and engraving in his The Head of a Shark Dissected. It was only in 1835 that they were assigned to a definite species, as Swiss naturalist Louis Agassiz coined the species Charcharodon megalodon. Charcharodon is the genus of today's Great White Shark (Charcharadon carcharias), but the precise relation between the species has been much disputed; today it is considered that Megalodon belongs to its own, separate Carcharocles genus. No wonder the confusion: like that of today's sharks, the Megalodon's skeleton was composed entirely of cartilage rather than bone, a substance almost impossible to preserve in the fossil record; indeed only very few fragments of the Meg's vertebrae have ever been uncovered. As a result, even the size of the prehistoric fish has been a continual cause for debate, with estimates for a maximum full-grown size varying from just over 40 to a terrifying 98 feet in length.

Nonetheless, the teeth on their own can tell us a certain amount about the Megalodon's physique and hunting methods; near-complete sets of dentition found in the US and Japan allow comparatively accurate reconstruction of the jaw arrangement. Bite marks on contemporaneous victims indicate a vicious, efficient hunter, who rather than the opportunistic method employed by today's large sharks, was an active hunter who probably rammed its prey heavily from below in order to stun them, before going in for the kill. It may even have employed a disabling tactic of biting off the fins and flippers of the whales and other large marine fauna upon which it preyed, in order to immobilize them.

Vito Bertucci dedicated over twenty years of his life to aquatic fossil hunting. Originally a jeweler and goldsmith, as an avid scuba diver he began underwater fossil collecting in the early 1980's, and soon became captivated with the teeth of the Megalodon. From his discovery of the very first specimen measuring over 7 inches in length, he undertook years of research into the relative lengths and arrangement of these teeth, visualizing the day when he could reconstruct an entire jaw. His first attempt comprised teeth up to 6 inches in length, the larger specimens being considerably harder to find, and that 5½ foot example now hangs in the American Museum of Natural History, New York, whilst another, measuring 6½ feet high, is on display at the Baltimore Aquarium. He opened and operated a Shark Museum in Port Royal, South Carolina, and his life and work was featured by National Geographic both on its television channel and in its print publication. After 16 years of collecting, Vito finally had enough 7+ inch teeth to recreate his greatest jaw yet, the one on offer here, which took over a year and a half to construct with the meticulous scientific accuracy demanded of such an important project. And sadly, it was to be his last, for Vito Bertucci passed away in October 2004 doing what he loved best, diving for fossils in the cold dark waters of the Ossabaw Sound in Chatham County, South Carolina. 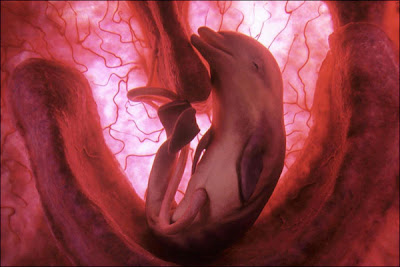 Just months after America's worst oil disaster in the Gulf of Mexico a much higher than normal seasonal appearance of newborn and still born dolphins are washing ashore in at least four states.

Is this a byproduct of heightened regional monitoring after a major ecological disaster, or a harbinger of things to come for the Gulf?

As top order predators regional dolphin populations are the quintessential "canary in the coal mine," the first to signal accumulated toxins in the food chain. Dolphins may have gorged on weakened fish and shrimp last summer, or may have become immune compromised passing through sub sea plumes of oil and Corexit.

Or this may just "an unusual mortality event," with no causal effect at all.

Unfortunately there is very little hard data on seasonal fetal dolphin deaths in the region. Most dolphin census data or studies look at population groups and mass strandings see example.

Hopefully the cause of fetal and calf dolphin deaths in the region can be uncovered by researchers, but as we read over at the Deep Sea News Blog from Dr.Bik last week:

Then there’s the money. Or rather, there isn’t the money. Only $50 million of BP’s promised $500 million in research money has been doled out; a scientific board has been set up to distribute the remaining $450 million, but it seems like they’re still writing ethical guidelines and drafting up an application process. Which means, probably another year before any scientists will be able to use money from this pot.
Posted by Horizon Charters Guadalupe Cage Diving at 7:23 AM No comments: